There was a momentary sound of vacuuming air before the burly gunslinger that Quartiz, or rather Quint, called Gily muscled the heavily reinforced door shut. Stepping inside the secure area, Luck took a backwards glance through the small window in the door at Dume, who watched her progress, most likely he had confirmed to the rest of the acolyte cell that Quint had been located.  Stepping past Gily, and a lithe female clad in a black body glove that Luck believed was likely an Ashen Tear assassin, Luck stopped in front of Quint not entirely sure what to do.  It had been over a year since she had seen him. Wanted throughout the sector, ever on the run from the authorities, Quint had abandoned the Inquisition, his friends, and her.  Luck could not believe it, Quint would not do such a thing, but he had…without warning…without saying goodbye.  Luck felt Quint embrace her and she embraced him back without hesitation.  Her mind was flooded with questions but she said nothing, enjoying the moment, a tear of joy trickling from her eye, she did not want to lose him again.

“Its good to see you, “Quint said with a smile, releasing her.  “This is new,” he said indicating the gold-filigreed bionic eye that Luck had acquired from Lord Tolly.  “Looks nice.”

Luck was at a loss for words.  So much had happened since she had last seen Quint when they were prisoners of the Dark Eldar- the escape, her officially joining the Inquisition, the missions she had been on, the things she had seen.  There was so much to say that she was paralyzed on where to start.

“Come, we need to talk,” Quint said guiding her deeper into the facility.  The door and Dume’s face in the window blocked from view as the Ashen Tear assassin followed them a few steps back in silence.  “You know, you guys are not too bright when it comes to undercover work.  My crew had you all pegged for interest the moment you entered Blinding Gulch.  I picked this place because it was close to home.  I could use my connections to get what I needed from the main hive- equipment, muscle, resources.  Gily and I go way back.  I was glad to see he was still alive when I looked him up.  He’ll never admit that I’m better than him, but he knows it.  He’s a gun wyrd- an unsanctioned psyker that uses his powers to enhance his gunslinging abilities.  Kinda funny we consider each other friends when you think about it.  We’re like opposites. Guess there’s some truth to that ancient Terran saying.  Anyways, I also picked this area because there is no official Imperial presence, so when an Ecclessiarchy priest and entourage walk in to set up shop it draws a lot of attention.  Had some of my guys keeping tabs on you and it didn’t take long to recognize you and Bishop.  Pretty shoddy work.”

Quint stopped at another reinforced door and punched in a code on an adjacent keypad.  There was another hiss of negative air pressure as Quint struggled briefly to get the door open.  On the other side was a security room of sorts, banks of monitors showing different parts of the town, as well as interior views of what looked like labs and medicae bays- rows of beds holding naked unconscious people hooked up to an extensive array of monitoring equipment.  Attached to each of the bodies was one of the Tyranid parasites that Luck and her companions had discovered during their investigation. Quint directed Luck’s attention to the bank of security monitors depicting different parts of Blinding Gulch, many of them showed the wanton death and destruction Lord Sunderbone and his Skarnit’s Dragons were inflicting on the townsfolk in the wake of their victory against the Cadavers, a victory that Luck and her Inquisition companions had assisted in. 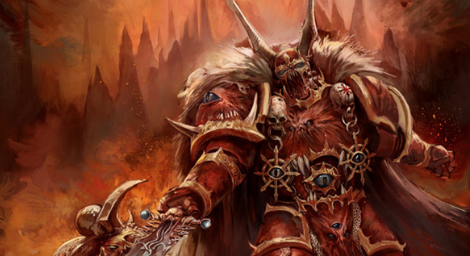 “Kind of an amusing irony, the Inquisition inadvertently supporting a Chaos uprising. Oh, I bet that hurt,” Quint suddenly said with a snicker as one of the monitors displayed Amsterdam getting cut down by Lord Sunderbone’s massive sword as he presented the Chaos Champion his arbitrator badge.  “I’m disappointed that all my work here is coming to an abrupt end, but I think we got enough data.”  Quint turned to one of the tech priests in the room, “Upload the last stress test data and terminate the Hive.”  Quint hit a button and a warning klaxon sounded.  Strobe lights lit up on several of the monitors.  “Come on Luck, it’s time to go.”

Luck finally found her voice to speak, “…the Hive?”

Quint looked at her intently for a few seconds before responding, “This,” he said pointing to the monitors displaying the rows of unconscious people, “is the Hive.  The Logicians are interested in understanding how the Tyranid Hive Mind works, specifically if that phenomena can be replicated in humans, with some assistance by augmenting our human physiology with Tyranid organisms.  We have had some preliminary successes- limited psychic ability manifestations, short range telepathy and some successful information infusions to several individuals from a single point of origin.  The science is still a work in its developing stages and test subjects don’t last long but we are making progress.  I don’t know all the technical aspects of it, my responsibility is ensuring the operation runs smoothly, free of complications.  I had that taken care of for the most part when I set the Cadavers up to wipe out the Skarnit’s Dragons and run this town, under my directions of course, but that’s no longer an option now.”  Quint started briskly walking through another security door that lead into a hallway with several branching corridors and doorways.

Luck followed, still processing what Quint had said.  “Terminate the Hive, you’re going to kill all of them- the test subjects?”

“Not just them,” Quint replied, “most of the population of Blinding Gulch in fact.  The Inquisition should give me a payout for handling their Chaos “problem.”  Typical Logician protocol if an operation is discovered, Burn and Run.  In this case, courtesy of a couple of low yield torpedo warheads I was able to secure from Captain Coronnia.  Got them set-up in a building near town square.  More than enough to level this dump of a town and everyone in it.  Probably be some survivors on the outskirts- the Emperor Protects” Quint said in a mocking tone.  “Come on, we need to get out of here.”

Quint stopped and turned to Luck, “Left?  I…” he had a momentary look of confusion.  “I didn’t leave.  I’ve been doing as instructed” though confusion remained in his tone, his brow furrowed as if searching for a memory.  “Sand said that…” his voice trailed off and he appeared frozen in panic for a brief moment before continuing, “No, it wasn’t Sand.  That’s not right…”  Quint fidgeted with the snaps of one of his holsters as he became lost in thought.  The Ashen Tear assassin took notice and was studying Quint closely.  “I’m not sure what…” Quint started, looking left to right in a daze of anxiety.  “Why’d you say I left you?  You know that’s not true.”

“Quint,” Luck looked into his eyes, “I haven’t seen you in over two years.