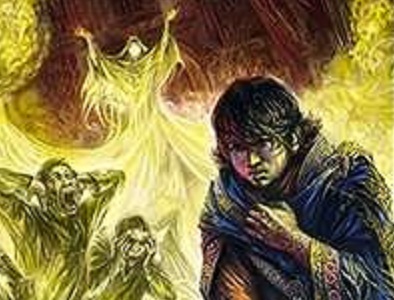 [Stationary Pict-Source] Wide angle view of a small cell of bare rockcrete adorned with hexagrammatic wards lined with silver, a simple table is bolted to the floor set with two chairs. The room has one door of reinforced steel also adorned with hexagrammatic wards. Next to the door is a large man [Subject I] with augmented musculature armored in carapace and wielding a large shield bearing the symbol of the Inquisition- positively identified as Mir (or his nickname “Red”), ex-Imperial Guardsman turned Crusader and Inquisitor Sand’s personal bodyguard [verified].

Sitting in one of the chairs is a handsome man [Subject II] of Scintiiian descent wearing a white and red robe and an Inquisitorial Rosette hanging from a silver chain- positively identified as Inquisitor Gramen Sand, Ordo Xenos [verified]. Sitting in the other chair, opposite [Subject II] [Sand] is a naked man [Subject III] covered in scars on his arms and legs, his hair has been shorn and he possesses a vacant look consistent with temporary and permanent mental illness (diagnoses and origin pending, but likely due to unshielded Warp exposure), he is hooked up to an excruciator- positively identified as Gelk Vandetton, certified level 4 unskilled laborer from the planet of Malfi, with Serf rights owned by the Devayne Incorporation, and suspected Chaos cultist of the Yellow Haven [unverified].

[Subject II] [Sand] Lays a bronze circular pendant on the table in front of [Subject III] [Vendetton]. On the pendant’s surface is a symbol of three curved lines radiating out from a central point. The symbol itself appears to be yellow in color but does not appear to be painted or otherwise applied to the pendant’s surface. At the presentation of the pendant there is a brief feeling of unease and sickness in the cell but auspex shows no notable readings. Mir flinches for a moment, his hand tightening on his sheathed power sword, [Subject III] [Vandetton’s] facial expression changes from vacant to animated excitement, perhaps madness.

VOICE (1) [VANDETTON]: The Yellow Sign! You have seen it! I have seen it! The Last King, he was here! He was here!
VOICE (2) [SAND]: “Was” being the correct disposition of current circumstances. The plot by Livius Carobo and his associates of the Yellow Haven to summon a daemonic entity and cause bedlam and death was thwarted by the might of the Emperor. Hundreds are dead, hundreds more afflicted with madness, but your “King” has been banished back to the Warp, unsuccessful in his attempt to manifest fully, the sacrifice he was expecting not obtained.
VOICE (1) [VANDETTON]: The King is eternal. The King is always.
VOICE (2) [SAND]: So is Humanity. Humanity will endure. Because it must.

Auspex readings indicate an increase and stabilized pulse from the excruiator, so subtle that [Subject III] [Vandetton] does not even realize that he is being affected. [Subject II] [Sand] covers the pendant with one hand (there is a barely noticeable grimace of discomfort from him…his will is strong) and uses his other to hold [Subject III] [Vandetton] by the shoulder in a friendly manner, like someone might do to a comrade.

VOICE (2) [SAND]: Gelk, the King in Rags and Tatters is not your King. The Emperor is your only true King. Look what was done in the name of the King of Rags and Tatters…death and madness. Innocents… children…order…safety. These were all laid to waste only for the promise of more. That is what the King in Rags and Tatters sought. That is what his pawns, Carbo, Dulius and Colia were trying to facilitate. You could not have known. You were not a willing conspirator in this. You were deceived. You were tricked into believing that what the Yellow Haven was doing was for the best. This is exactly why the Emperor must be a hard shepherd at times…a strict but loving father for there is much we do not understand that he protects us from.

[Subject II] [Sand] lifts [Subject III] [Vandetton’s] gaze up from the hand-covered pendant and to the Rosette hanging on his neck.

VOICE (2) [SAND]: Vandetton, there is forgiveness for what you have done. Like I said, the Emperor is a caring father. He understands our moments of weakness. Momentarily lapses of judgement. It is only fair to understand that we are not gifted with his supreme intellect, will and courage. You were caught up in the moment of being part of an extraordinary production. This play, “Adventure Regis,” by the famous playwright Livius Carbo. A grand production! A grand spectacle to the world and beyond! How would you have known the true intentions, your fault in what ultimately transpired is minor. They took advantage of you. Promised falsehoods. The Emperor understands…the Emperor forgives.

A tear rolls down the cheek of [Subject III] [Vandetton]. Another one starts to roll down the other cheek.

VOICE (2) [SAND]: Vandetton, Come back to us, your father wants you back in the family. Show him that you are still a child of the Imperium. I know that this production, “Adventure Regis,” goes beyond the Yellow Haven. I know there was another, another who seeded the idea, one who was too cowardly to witness firsthand the death and destruction he caused…one who fears the Emperor’s light. Perhaps you saw someone else during your time with the Yellow Haven. Someone the cult’s inner circle respected…believed important. Vandetton, do not let this happen to another city…to another world. You can stop this.
VOICE (1) [VANDETTON]: I…I…
VOICE (2) [SAND]: Vandetton, the Emperor will understand, and he will forgive, but you must show him that you are indeed sorry.

Auspex readings indicate a slight increase in the e-zone pulse of the excruciator indicating a further influence of the portion of the brain responsible for feelings of regret and remorse (truly masterful interrogation work).

VOICE (1) [VANDETTON]: Sieger…Stefen Sieger. I heard his name spoken a couple times and saw him meet with the inner circle once. I do not know anything else, but it was him, I’m sure of it.
Searching…Stefen Sieger confirmed Chaos cultist and heretic. Wanted on several planetary and Imperial warrants, including warrants from every Ordos of the Inquisition. Cross reference files EVC821-Saint Margaret’s Schola Progenium, Pellicuda IX and NUE43- College of Hetaireia Lexis, Scintilla.
VOICE (2) [SAND]: You have done well Vandetton. The Emperor knows that you are indeed sorry and he forgives you. Know that you walk at his side again, a loyal child of the Imperium.
[Subject I] [Mir] Silently walks up behind [Subject III] [Vandetton] as [Subject II] [Sand] removes his hand from [Subject III] [Vandetton] and leans back in his chair. [Subject III] [Vandetton] sobs, tears falling on the table.
VOICE (2) [SAND]: The Emperor embraces you Vendetton.