Acolytes Godwin, Rylak and Lupus are dispatched to the frontier planet of Ganf Magna, where they have been assigned to assist one of Inquisitor Sand’s senior acolytes, Comptroller Thodinna, with renovating a remote hunting manor that Sand has recently purchased for use as a recreation locale and safe house. Despite augmenting the existing manor staff with employees from Sand, the renovations have been plagued by delays from sporadic Ork attacks, accidents and general laziness from the staff. Thodinna is not sure how to explain the rash of delays on what should be a simple project. The acolytes do not know much about the manor, or its previous owners, the Bruner noble family from Scintilla, but Lupus does recall hearing that the manor’s former resident, Andreas Bruner, was considered somewhat of an outcast of the family and mysteriously disappeared five years ago.

Arriving at the small shuttle port village of Ubersreik, the acolytes make contact with Thodinna’s assistant, Vern Hendrick, who briefs them on a recent devastating attack by the Orks and yet more delays. The following morning, the party departs to the remote manor, which will take three hours of driving time to reach. The trip is long and uneventful but when they reach a couple miles from the manor itself, the woods surrounding the road seems to come alive with half-seen figures darting into the cover of trees and foliage. Ever paranoid of an Ork attack, Hendrick makes haste to the manor, resulting in a bumpy and dangerous ride that nearly ends in a crash when he loses control of their vehicle just outside the manor gates.

Wasting no time, Orks emerge from the forest and assault the vehicle. The acolytes and Hendrick fight for survival and are perplexed as they watch the manor’s guards observe the attack but offer no assistance. Some of the supplies in the truck are damaged during a melee between Rylak, Lupus and an Ork, and Hendrick is critically wounded. Eventually, the guards are motivated into action by the appearance of their captain and an effective counterattack takes place which leaves Hendrick in critical condition, kills some of the Orks and sends the rest fleeing back into the forest. 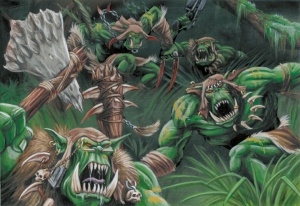 Safely inside the walls of the manor compound, the acolytes find the place rundown and in desperate need of repair- the walls of the compound are crumbling, plants have overgrown the yard, unconnected rolls of power and signal cabling lay exposed, and most of the staff do not appear to be interested in doing much more than sitting around. While Hendrick is taken to the hospice, and the truck is unloaded, the acolytes meet with Thodinna. She can shed no light on the reason for the delays other than explaining that problems with the staff and Orks started a week after her arrival. She also explains that some of the manor staff were employed by the Bruner family and came with the manor when Sand purchased it. She has not had time to investigate their backgrounds and vet them into their master’s organization yet, electing to finish renovating the manor first.

With several hours before dinner is served, the acolytes begin their investigation. They walk the manor grounds and talk to several of the staff members- including Gand (manor huntsman and ex-Catachan Guardsman who raises massive manhounds), Gregor, Piersson (manor’s Steward), Sister Sonja (a blind Hospitaller of the Adeptus Soroitas), Otto Geizhals (manor librarian) and Cpt. Blucher (head of the House Guard). Some of the staff are helpful, others are not and others are just strange. No one seems to have a concrete explanation for the recent delays, but the acolytes do start to notice that some of the staff do indeed seem to be afflicted with an attitude of laziness and appear physically tired.

There are several items of interests that the acolytes do find- one is a heretical text called A Disquieting Proposal in the manor library and the other is a Warp-tainted painting of a large eye in the sitting room. Lupus and Rylak lose some of their nerve in the presence of the painting, but Godwin (used to viewing the horrors of the Warp) maintains his composure and inspects the painting. Believing that its taint may be related to the recent calamities happening at the manor, he reports to Thodinna the immediate need to report to Inquisitor Sand about the painting so that a specialist team can be sent as soon as possible. Sadly, Thodinna informs Godwin that the ability to send out an astropathic message to their master is days away. In the meantime, Thodinna orders that the sitting room be secured from entry. 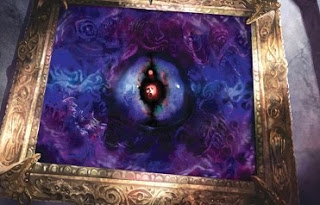 Suspending their investigation for the time being, Godwin and Rylak proceed to join the rest of the manor’s upper echelon staff for dinner while Lupus meets one of the servant women to hear her confession at the manor’s shrine. Unbeknownst to his comrades, Lupus is drugged unconscious by drinking spiked wine provided by the servant, in addition, many of the manor’s dinner attendees become very tired and lethargic after eating the main course. Suspecting poisoned food as responsible, Rylak (who did not eat) searches the manor grounds for Lupus and finds that many of the manor’s staff are sleeping or no where to be found, which the exception of Gand, who Rylak spots outside the manor’s undefended damaged walls facing off with his manhounds against a group of attacking Orks. The Orks are a serious threat to the now mostly undefended manor and Rylak dispatches one of the Orks from afar before continuing his search- hoping Gand and his hounds can hold the Orks off until reinforcements are found.

Thodinna and Godwin and awakened by an injection of de-tox and kick from Sister Sonja who warns them that the manor is under attack and all of the staff are either sleeping or missing. She also reports that she can hear some strange chanting coming from the library. With Thodinna and Sister Sonja gathering manor staff for a defense, Godwin voxes Rylak to meet him in the library.

There is indeed chanting heard in the empty library, and after locating a trapdoor hidden beneath a 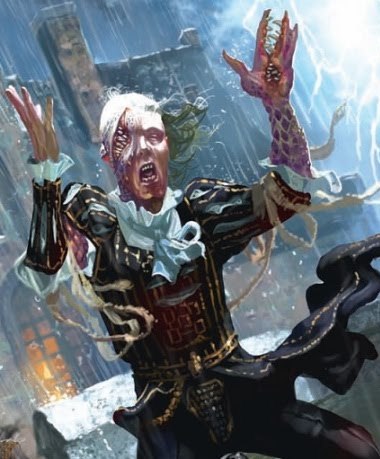 rug, Godwin and Rylak enter a basement chamber set up for a Chaos ceremony. One of the manor’s servants already lies dead on an altar topped with the painting of the eye. Gregor stands over the dead man wielding a knife and chants from a tome; one of his eyes is a black orb of Warp darkness. Nearby other manor staff, including Otto, chant while one of the manor’s house guards attempts to bring Lupus to the altar. Godwin wastes no time in confronting the cultists by exposing them to his third-eye and several of them collapse dead from the Navigator’s gaze. Gregor flees the basement with the blood-soaked painting while Godwin, Lupus and Rylak take on the remaining cultists.

After dispatching the last of the cultists, the acolytes head back upstairs and run into Thodinna and Sister Sonja. Sister Sonja tells them that Gregor is on the roof and has summoned a daemon from the Warp. She also states that some of the Orks have gotten past Gand and are inside the manor compound. She gives Lupus her Catechist Stake-crossbow and quarrels since her blindness prevents her from using them.

While Thodinna, Sister Sonja and their small group of staff raid the manor’s armory, Rylak, Godwin and Lupus head outside to confront Gregor and the evil he has brought forth. In the light of the blood red moon, they can see what Gregor has summoned- a Screamer of Tzeentch. The daemonic flying beast, under the control of Gregor, rips through acolytes and Orks alike. A fierce battle breaks out between Godwin, Rylak and Gregor on the rooftop. They manage to kill Gregor but both are heavily wounded. Meanwhile, Lupus is able to place a devastating bolt shot in the Screamer but it still takes one more precision shot from Rylak’s rifle to send the creature back to the Warp.

The Orks are repelled but at the cost of many manor staff being wounded or killed. Lupus, Rylak, Godwin and Thodinna secure the Chaos artifacts (the two books and the painting) and make arrangements to send word to their master as soon as possible for additional manpower to see if the cultist threat has indeed been neutralized.