After months of being captives of the Dark Eldar and making passage through the Koronus Expanse after their escape, acolytes of Inquisitor Sand finally return to the Calixis Sector with some potential recruits for service in the Inquisition. Their welcome is back is an immediate quarantine and an extensive battery of invasive tests to ascertain taint, corruption and suitably for service in the Ordo Xenos.  Many months pass before the acolytes are finally cleared for service in the Inquisition.  In order to test the ability and resolve of the potential acolytes, as well as to ensure the proficiency of the returning acolytes, Inquisitor Sand’s senior Interrogator, Interrogator Artandis Jaxx, dispatches them to the frontier world of Tygress I under the leadership of senior acolyte Vern to investigate an odd radio transmission coming from the secluded farming and ranching settlement of Valiant; the brief transmission only reports an unspecified Xenos sighting. After locally-stationed Imperial Guard fail to find anything of note in Valiant, the acolytes are sent to double-check the Guards’ work.

After securing some military grade arms and equipment, as well as a Chimera Armored Personnel Carrier (APC), the team make their two day journey to Valiant.  Just outside the settlement Gunn gets the Chimera stuck and while digging the tank out the team happens to see a flock of carrion birds circling something in the distant woods. An investigation into the matter reveals a dead bear-like creature that has been viscously shredded and more importantly, the bear has evidence of mutations. 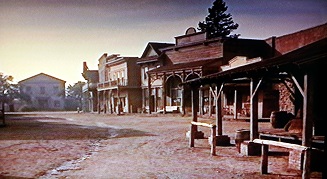 The team pulls into the town of Valiant just as the locals are finishing a funeral service near the small Imperial Church. From here they spilt up with Luck and Doomonue heading to the local saloon, the Dirty Thirty, where they befriend a crippled (legless) ex-Imperial Guard sergeant name Silas who really enjoys alcohol. The others head to the church and speak with the town priest, Father Kincaid, who is busy burying the deceased.

Both groups find that the townspeople are wary of talking to outsiders but appear to be Emperor-fearing folk and loyal to the Imperium. Following their conversation with Father Kincaid, that group of acolytes proceeds to the town hall to talk to Valiant’s mayor, a woman named Dahlia, and are able to learn the town’s secret- the townsfolk have recently become mutated with an assortment of physical mutations as well as a psychic gestalt where they can sense each other as well as a strange alien-like presence to the south of their town. The people are not sure what caused the mutations but since the affliction, something has been killing off the townsfolk.

Luck and Doomonue come face-to-face with this killer (sort of) when Silas is just about to tell them about the dangerous creatures lurking in the area when he’s attacked outside the saloon and ripped in half. The creature responsible is imposing and chameleon-like, blending in with the surroundings. As Luck faints away at the sight of the thing, Doomonue fires an autogun volley at the creature (seeming to wound it) and it flees without a trace.

After a heated discussion with the town’s leadership, mainly concerning whether or not the acolytes intend to report the townspeople’s mutant condition to the authorities, which would result in termination of all the population, the party decides to travel south to investigate this alien presence the townsfolk can “feel.”  Early the next morning the party heads out toward the south to investigate the unexplained “presence.”  They are joined by one of the locals to serve as a guide, a young man named Sebastian who comes highly regarded by the townsfolk as one of their best trackers and hunters.  A violent storm has moved into the area and their Chimera APC provides protection from the elements for the first half of their journey but when they reach the river, Vern does not want to risk the Chimera sinking and decides against using the Chimera’s amphibious capabilities. After parking the Chimera and leaving it under the guard of Vern’s massive combat servitor, Bjorn, the party makes their way on foot to where the townsfolk keep their boats.  It doesn’t take them long in the wind and rain to become soaked and Gunn fairs even worse when he decides to scout the area using his Dark Eldar skyboard where the sky offers no protection from the elements. 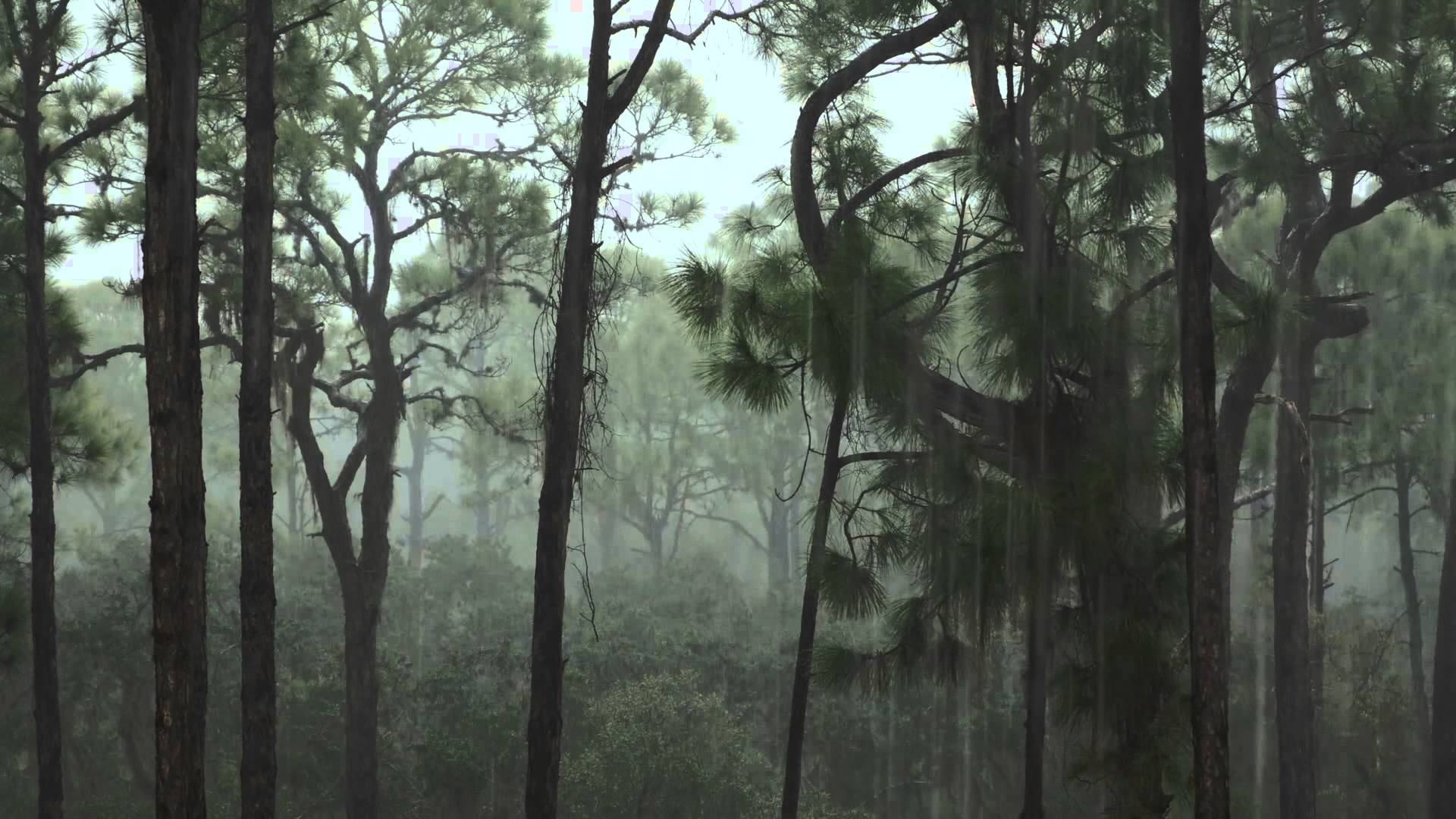 After crossing the river by boat, the party continues to the source of the mysterious presence and it soon becomes obvious that they are heading toward the nearest mountain, one that is shaped vaguely like a chimney, of the nearby mountain range.  Halfway to this mountain, the party comes under attack.  Ambushing the acolytes from the cover and concealment of some trees and bushes, Xenos creatures (that the acolytes later find out are Tyranid creatures called Termagants) fire upon them with their organic weaponry. Despite some minor wounds, the party is easily able to dispatch the creatures and burn their remains.

Upon arrival at the base of the mountain, the party is able to see that while most of the mountain is a natural formation, it has been augmented with some features made to look natural. A disguised set of stairs wind upward to a shallow alcove that hides a large reinforced door that appears to have been violently breached- from the inside.  The party enters the door and explores the interior of the mountain. What they find is a multi-level research complex of Imperial manufacture. There are signs of battle present but no bodies. Another thing of interest is that it appears that the entire facility has been wired with a network of explosives that were installed during the construction of the facility and not afterward. 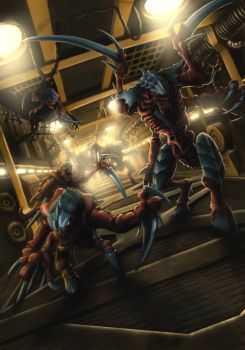 A search of one of the upper levels results in the party being attacked by extremely fast moving multi-limbed creatures armed with long deadly talons. A desperate battle occurs as the creatures negate the party’s ranged firepower advantage by quickly closing into melee with them. Despite the surprise attack by very capable close combat opponents, the acolytes are able to slay the creatures and flee back to the lower levels as Vern’s auspex alarms with the detection of a larger force converging on their position.

During their flight, Vern is able to detect an Adeptus Mechanicus signal being broadcasted from the lower levels and makes the decision for the party to investigate despite the Xenos creatures hot on their heels and closing. Upon reaching the last level of the complex, they find a long corridor that ends in a set of heavily reinforced double doors. The corridor is lined with rows of sentry turrets with a variety of ranged weaponry and their effectiveness is evident from the large number of rotting Xenos corpses filling the corridor.

Utilizing his vox-capabilities, Magos Vern is able to make contact with Magos Dolan, a fellow member of the Adeptus Mechanicus, and chief overseer of this mountain facility, who after a conversation with Gunn and Vern separately, grants the group safe passage and access into the command and control center of the facility.  Safe, for now, from the approaching Tyranids, the acolytes and Magos Dolan discuss the purpose of the facility and the local Tyranid threat.  Magos Dolan explains that the purpose of the secret facility is research on the Tyranids species and choice specimens (luckily there are no Genestealers present) were brought to the facility for study and experiments.  A few months ago, a containment breach occurred and the the Tyranids were able to escape confinement despite the facility’s security protocols.  All of Magos Dolan’s security personnel and research staff have been killed and the remaining Tyranids have been using the facility as their home and roaming the countryside unrestricted.  Magos Dolan states that the monthly inspection and resupply team is months overdue and its status is unknown.  Magos Dolan has remained in the Command and Control Center as its the only safe location in the facility awaiting reinforcements but this area will soon be compromised as the Tyranids are actively working to gain access.

The Tyranids’ success in this endeavor soon becomes apparent as klaxon alarms alert everyone only moments before a Ravener tunnels out from the floor followed by a horde of Termagants.  The acolytes and Magos Dolan and his remaining two combat servitors are quickly fighting for their lives as the massive creature barrels toward them leaving a wake of destroyed cogitator stations while the Termagants provide massive volleys of fire support.  The ensuing combat is desperate as the acolytes combine their efforts to take down the Ravener and the horde of smaller creatures and some of them fall to the ground with serious injuries before their comrades are able to dispatch their foes.  Luckily all survive the battle but with the command and control center successfully breached, it is no longer is a safe place from the Tyranids. 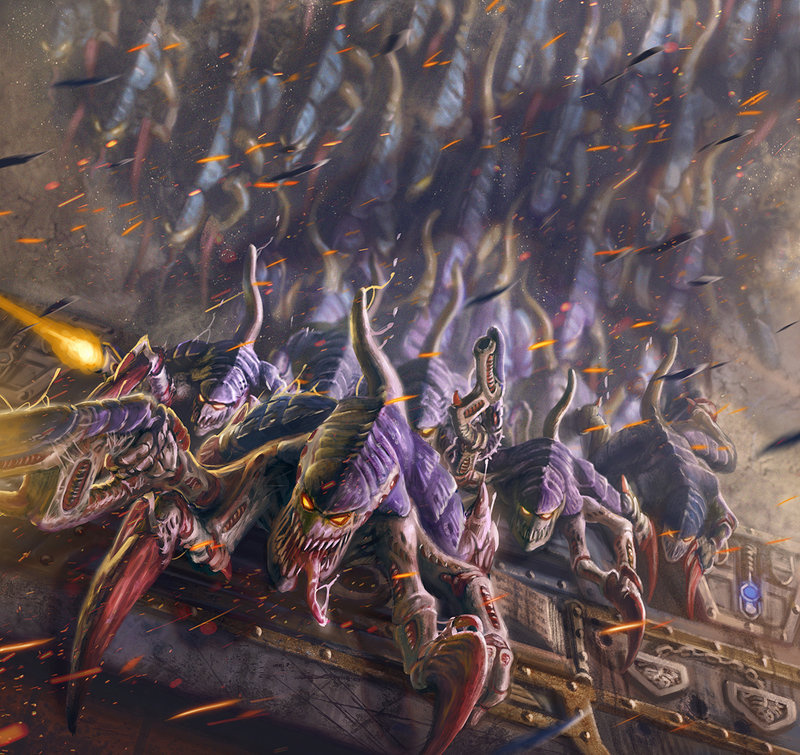 With the Tyranid threat very real and options limited, Magos Dolan requests the acolytes to assist with triggering the facility’s auto-destruction measures.  When it was built, a network of explosives were installed in the facility’s infrastructure and high-threat areas but since their escape, the Tyranids became aware of the explosives and disconnected the master relay responsible for triggering the detonation.  Magos Dolan can activate the auto-destruct sequence as soon as the acolytes repair the relay, but the relay is located in an area that only Gunn (and one passenger) can reach via his skyboard.

Magos Dolan warns the acolytes that the relay is guarded by a powerful Tyranid psychic creature and supplies them with some combat drugs to provide them an edge in the fight, as well as a boltgun containing special anti-psyker rounds and an underslung grenade launcher loaded with a special anti-psyker grenade.  Armed with these weapons, Gunn and Luck decide to proceed to the relay while the rest of their party covers their advance from intervening Tyranid creatures.  The approach to the relay is indeed covered by flocks of Tyranid Gargoyles, which the acolytes engage while Gunn and Luck proceed to the relay. The battle with the flocks of Gargoyles is tasking and deadly and many of the acolytes are wounded, and their guide Sebastian is killed.  Meanwhile Gunn and Luck reach the relay and face off against its guardian, a Tyranid Zoanthrope, which uses its formidable psychic powers to blast and torment them while Gunn attempts to fix the relay.  Luck and Gunn struggle to survive the creature’s onslaught of power and their lack of proficiency in the use of the boltgun and its grenade launcher does little to assist in their cause.

Despite dire straits, the relay is reconnected and Magos Dolan is able to trigger the auto-destruct sequence with the acolytes barely escaping destruction from the explosive detonations and the mountain’s collapse.

* GM’s Note: This mission was ran with modifications from the Rifts Savage Worlds adventure “Contamination Principle” by Darrell Hayhurst. It can be found on the Pinnacle Entertainment Group website “here.”