After receiving their briefing, the Kill-team makes their way to the armory of the Deathwatch frigate, Thunder’s Word, to gather weapons and equipment. With the absence of their Devastator, Brother Corvin (who has returned to service with his parent Chapter) and the team’s other Librarian, Brother Erik (who is still healing from the injuries he sustained by the Tau on Baraban), the Apothecary, Brother G’heirnat, arms himself with a missile launcher to give the Kill-team some additional firepower to deal with masses of enemy troops and armored vehicles- he appears to have taken a liking to its use since the team’s last mission on Baraban. Palatine Ruby also decides that something with a little punch for enemy armor will be useful and appropriately swaps her bolt pistol for a powerful inferno pistol. Of additional note, the team has been joined by a newly inducted member of the Deathwatch- a Tech Marine from the Ultramarine Chapter named Brother Vectius, whose expertise should allow the Kill-team to secure valuable Intelligence from the Serrated Query’s data cogitators.

Once finished with arming, Brother Angelos takes on the role of team leader for this mission and briefs his team on the plan of attack, which involves an orbital insertion via drop pod straight into the heart of the compound just after the Imperial Guard and PDF begin their assault. The plan goes accordingly, and the Kill-team descends amongst the confused enemy- their drop pod crashing through the roof of one of the compound’s many warehouses and crushing several enemy troops before coming to rest and releasing its deadly human cargo.

Kill-team Kronus wastes no time with unleashing death on their enemies who start to fall from a mixture of bolter, missile and psychic death. The Kill-team decides to split into two groups- Brother Aoner and Brother Vectius remain on ground level to start looking for Intelligence and enemy leaders while Palatine Ruby, Brother Angelos and Brother G’heirnat go to the rooftop to rain death on their incoming foes. The Serrated Query soon begin to show that they are well equipped and it does not take long until multi-laser armed Sentinels, armored vehicles, heavy power-armored assault cannon wielding guards and a mass of highly disciplined light infantry converge on the Kill-team’s position.

The fighting becomes intense as bullets and explosions rock the area and the Kill-team starts to sustain injuries from the sheer amount of firepower being thrown at them. Brother G’heirnat starts targeting the sentinels for destruction with his missile launcher and Brother Angelos brings to the fight to the enemy on the ground starting with a jump pack leap onto the hood of one of the armored vehicles, which crushes its engine block and disables it. Palatine Ruby also descends to the ground via jump pack and takes the fight to the enemy. Losses for the enemy begin to mount, and with the destruction of their heavy weapons and armored support, the rest of the Serrated Query’s perimeter units are destroyed or routed.

With no notable Intel or prisoners to process for information, the Kill-team starts to clear the inside of individual buildings. One of these buildings appears to be of interest- a massive warehouse sealed with heavily reinforced doors with a complex locking mechanism. The heavy doors are no match for the Brother G’heirnat’s massive strength and Brother Vectius’ servo-arm as each of them easily tear open the doors. The forces of the Serrated Query are prepared for the breach and immediately fire on the Kill-team from their prepared defensive positions. What follows is a brutal battle against the last of the Serrated Query’s resistance. The Kill-team takes on Combat Servitors, highly trained Query Operatives, a rogue psyker and the overseer of the distribution center, a known criminal named Talbot. 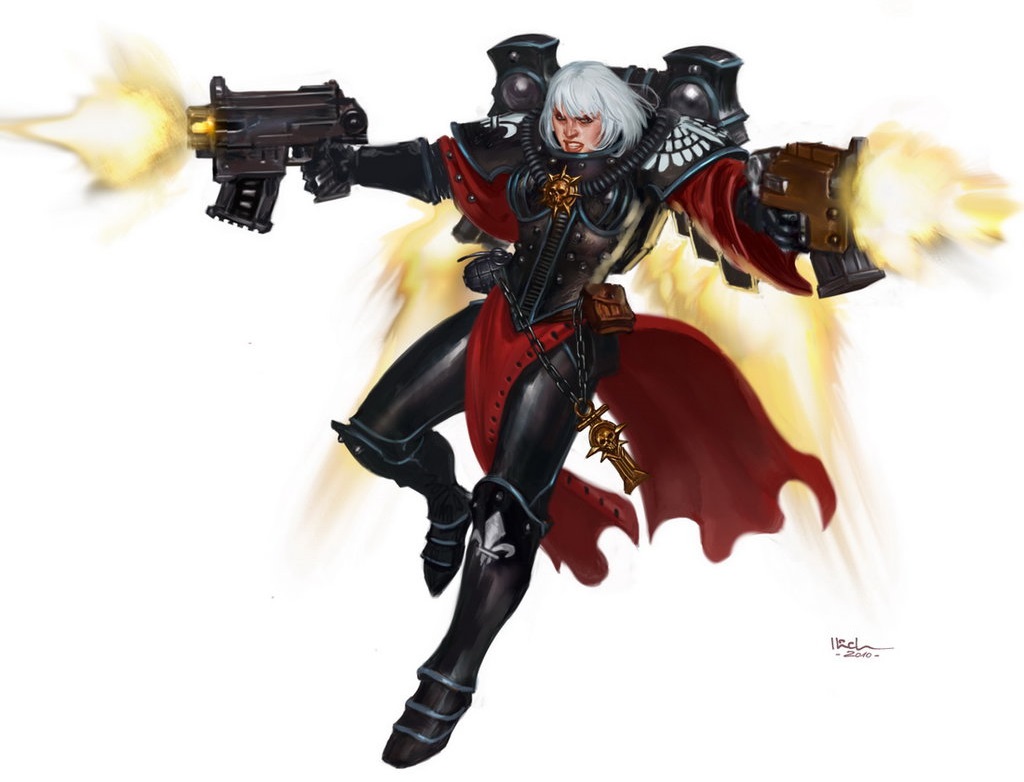 The tactics, skill and armament of the Serrated Query Operatives are enough to present a respectable challenge to the Space Marines and their lone Sister of Battle and the Kill-team sustains an initial pounding when they breach the warehouse. But the battle becomes desperate for the enemy as their forces slowly begin to fall to the Deathwatch and in the end Talbot is taken into custody; one of the lone survivors of the Serrated Query forces. Interrogation of Talbot and forensic analysis of the files housed in the warehouse data cogitators should provide the Inquisition with valuable information on the Serrated Query’s operations in this sector and beyond.