“Our task is solemn, and our purpose final. This is no matter of raucous glory, but of duty alone.” 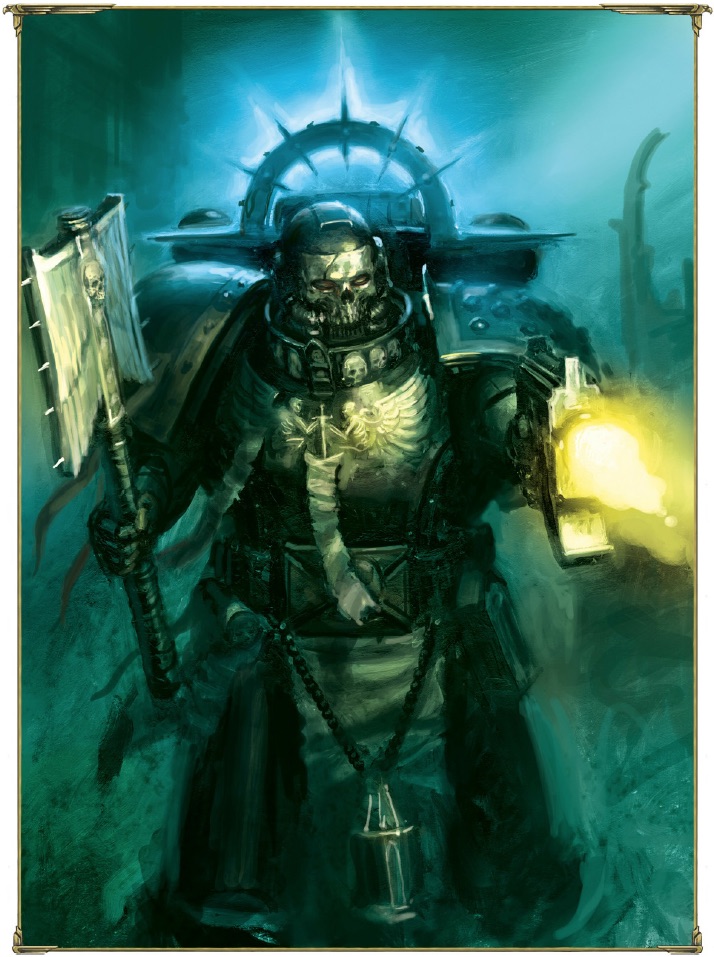 Several months have past since the events that took place on the Perihelion. The story of the daring rescue of their Battle-Brothers and the termination of Species-Seven has circulated the ranks of the Deathwatch and Inquisition, and the members of Kill-Team Kronus have found many who praise and respect their combat prowess and duty to the Imperium and the God-Emperor. Most of the Kill-Team have spent their time tasked as advisors, messengers, and inspectors dedicated toward improving the various war efforts in the Jericho Reach, while Brother G’heirnat chose to embark on the difficult path of becoming a Space Marine Chaplin.

A sudden summons of import has the members of Kill-Team Kronus dropping their current tasks and making haste to Watch Station Erioch; luckily, Brother G’heirnat has just finished his Chaplin training and is able to join his Kill-Team for this mission. Watch-Captain Hrolth Fangtaker, a loud and boisterous Space Wolf Long Fang well-known for not playing well with Space Marines of other Chapters, issues the Kill-Team their orders, but not before Brother Aoner of the Space Wolves and Brother Dante of the Dark Angels fulfill the tradition of their rival Chapters and participate in a duel to celebrate the great bout between their Primarchs. The bout seems to start out evenly matched but Brother Aoner is finally able to gain the upper hand and subdue his Dark Angel opponent much to the satisfaction of Watch-Captain Fangtaker. With honorable tradition fulfilled, Watch-Captain Fangtaker briefs the Kill-Team on their mission.

Over two centuries ago, an ancient relic revered by both the Space Wolves Chapter and the Deathwatch called the Halo of Providence was lost when the Imperial cruiser, the Ardent Crown, transporting the Space Wolf Librarian in possession of the item and his fellow Kill-Team members failed to return after initiating a Warp jump on a routine mission. The Halo of Providence is psychic hood of legendary power created by an Inquisitor over a millennia ago. It was thought to be lost until recently an Astropathic Choir received a vision that the Ardent Crown would soon return near the heavily populated hive world of Solace but would bring an unspecified disaster, possibly involving multiple breeds of foul Xenos, with it.

Selecting Brother Aoner as the team leader for this mission, the Kill-Team makes haste to the war torn Spinward Front to locate and intercept the Ardent Crown before it’s too late. After two weeks of Warp travel, the Kill-Team’s ship transitions out of the Warp into the Solace sector and begins its search for the lost ship. Augars soon pick up the vessel drifting derelict in space under only emergency power with no signs of life. The Kill-Team gathers their arms and equipment, strap into a boarding torpedo and are promptly shot across the void toward their target. Things appear to be proceeding without complications until an Eldar Nightshade escort frigate materializes in their path and begins to engage in battle with the Deathwatch ship that brought the Kill-Team to this sector. Fortunately, the Kill-Team’s boarding torpedo glances off the hull of the Eldar ship, spins out of control but still manages to crash into the Ardent Crown. After some minor setbacks that costs them precious time, the Kill-Team is able to breach the ship’s interior and begin their search for the relic. There is concern when they realize they are unable to send or receive communications with their ship.

Walking the ship’s desolate and damaged interior it soon becomes apparent that the ship’s crew is most likely long dead and even worse, deadly genestealers now stalk the corridors. Both Brother Aoner and Brother Vectis are able to confirm through psychic and technical means the likely location of the Halo of Providence in the ship’s fore weapons bay and direct the Team in that direction. Not long after, they finally meet the enemy as several genestealers ambush the Team from their concealment near the corridors’ ceiling. Brother Dante goes down as several of the foul Xenos gang up on the Tactical Marine, but his teammates are able to dispatch the creatures and administer aid.

Ever wary of additional threats, the Kill-Team proceeds cautiously, and with the exception of a moment of concern when the whole ship appears to briefly shudder and shake, they make it to the Ardent Crown’s fore weapons bay. Upon forcing open a set of blast doors, the Kill-Team is surprised to find a huge battle taking place inside between genestealers and a force of Eldar comprised of a squad of Warp Spiders and a squad of sharpshooting Pathfinders led by a Farseer and a Warlock. Amongst the ancient stockpile of munitions and other debris, the Kill-Team sees that near the Eldar fighting position are the bodies of four Adeptus Astartes whose power armor is painted in the black color of the Deathwatch. 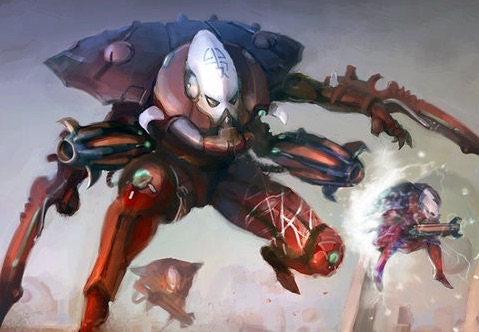 The Kill-Team advances toward the Eldar position fighting their way through the genestealers, which are between the two forces. Shortly after the three-way battle begins, the Warp Spiders and the Farseer vanish leaving only the Warlock and the Pathfinders to continue the fight with their enemies. The psychic might of the Warlock proves to be particularly effective against his foes as he compels both genestealers and Space Marines to battle their own forces. Brothers Vectis and Angelos engage each other in devastating melee combat and come close to killing each other before the Warlock’s psychic power fails and he is promptly smashed to bloody pulp by Brother Vectis’ thunder hammer. The Kill-Team is able to dispatch the last of the remaining Xenos and secure the area.

Inspecting the power armored remains, Brother Aoner is able to confirm they are the lost Deathwatch Kill-Team long since dead-their precious geneseed no longer recoverable. In addition, Brother Aoner’s inspection shows that the deceased librarian’s psychic hood (the Halo of Providence) is missing. Suspecting that the Eldar Farseer had taken the item prior to her escape, Brother Aoner psychically scans the ship and is able to locate a strong psychic signature, which he believes is the Farseer. After plotting a course through the ship to intercept the Farseer, Brother Aoner tasks Sister Ruby and Brother Vectis with preparing a boarding torpedo that they found in the fore weapons bay for launch while he takes the rest of the team to recover the artifact.

Unfortunately, it appears that Brother Aoner’s calculations are off and his team fails to find the Eldar, or the Halo of Providence; a psychic scan supports that the Eldar are no longer aboard the Ardent Crown. He orders the team back to the fore weapons bay where the boarding torpedo has been successfully prepped and loaded with the remains of the deceased Kill-Team.

Their mission a failure, the Kill-Team departs from the Ardent Crown- their boarding torpedo shot from the derelict vessel into the unknown since communications with their transport ship have still not been re-established. As the torpedo speeds away from the Crown, the Kill-Team gets a brief view through the torpedo’s small viewing window of the Eldar frigate dematerializing from view and the Ardent Crown plummeting into the upper atmosphere of the heavily populated hive world of Solace.

* GM’s Note: This mission was slightly modified by the GM from the Fantasy Flight Deathwatch adventure of the same name. It can be found here.*