Nearly a year has passed since I dispatched Interrogator Quint and acolytes Pullo and Rylak to the frontier world of Faldon Kise to recover a stolen exterminatus weapon, and nearly three months has passed since I dispatched acolytes Bishop, Jez, Luck, Silvain and Jak into the Eldar Webway to attempt to rescue Quint and Pullo after I received information that they had been captured by the Dark Eldar and were slaves in a city called the Nexus of Shadows. Surprise and concern do not even begin to describe the feelings going through my mind when during an investigation into what was originally presented to me as the suspected location of a lost cache of Dark Age Technology on the prosperous hive world of Solace, I find an excavation operation being conducted by operatives of the heretical tech-cult known as the Logicians that is being overseen by Interrogator Quint and a heretek, and known Logician agent that has been designated exocummincate traitoris by the Inquisition and Adeptus Mechanicus, named Magos Caerivus.

Operating in secret using Rogue Trader Melua’s Writ of Trade to facilitate the sale of war stocks to support the combat operations going on in the Spinward Front, I made my way down to the planet’s surface accompanied by my ever faithful Crusader bodyguard, Red, and acolytes Flak, Hadrian and Lupus supported by three combat servitors. The location of the cache was easily found using the coordinates that my sources provided- housed in the interior of one of Solace’s many unremarkable mountains and accessed by an opening that the Logicians had excavated.

We breached the well-guarded security perimeter the Logicians had set up at the cost of the combat servitors we had brought with us and proceeded into the mountain’s interior. What the Logicians had uncovered beneath the desolate wasteland of Solace was no cache of Dark Age Technology, but a subterranean realm of precisely machined fluorescent-lit corridors and rooms decorated in geometric patterns and symbols.

One of these antechambers the Logicians had turned into a scientific laboratory in which to study the ancient ruins and its denizens- strange metallic humanoid beings that looked like advanced robots, which initially appeared to be in some type of stasis or hibernation. Despite their bipedal human-like appearance, there was something so utterly alien about the creatures that I have no doubt they are of Xenos design. I have never heard or read of creatures such as these in any of the Imperial records I have accessed, with the exception of the report that Red turned in many years ago documenting Red Cell’s deadly encounter with similar beings in one of the alternate timelines he visited while investigating Rogue Trader Eramus Haarlock’s Blind Tesseract on the planet of Mara; it was unsettling when Red confirmed that these indeed appeared to be the same type of creatures. 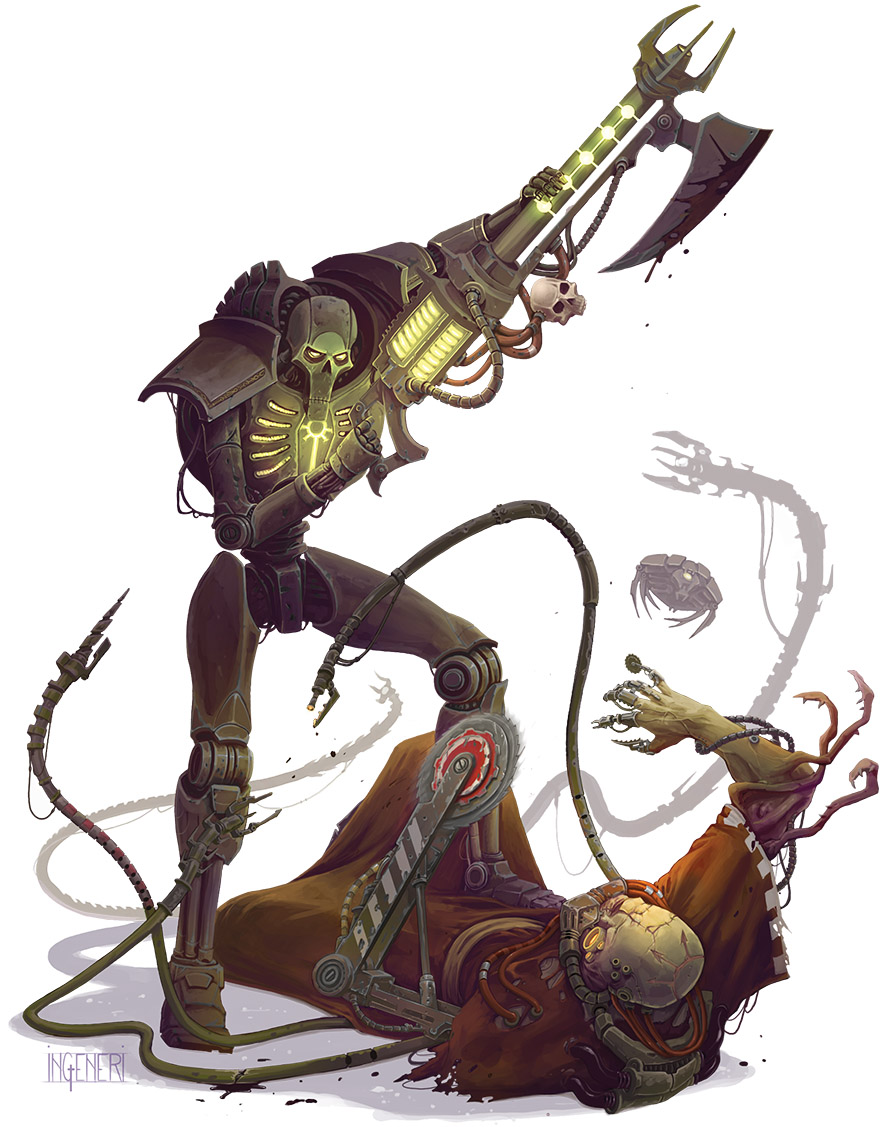 Our presence did not go unnoticed, and immediately after entering this research area we were attacked by Logician forces led by Interrogator Quint and Caerivus. Quint showed no remorse or hesitation as he fired on my party nearly immolating Red with a deadly shot from an inferno pistol. During the battle, a sudden and violent earthquake shook the area and collapsed the passage that we had used to enter the mountain. Fortunately there were other passages leading out of the room that could hopefully be used to return to the surface but the earthquake brought more than just the danger of being trapped in a subterranean tomb. It appears that the earthquake triggered something which caused the inanimate robots to “awaken.” They rose from their evaluation beds while hundreds of metallic beetle-like constructs began pouring into the room from circular orifices in the room’s walls.

Armed with destructive energy weapons that seem to strip away flesh, and even more resilient materials, such as that found in carapace armor, down to their basic molecular components, and eventual nonexistence, the constructs attacked Logician and Inquisition Agent alike- their movements efficient and precise and seemingly eerily coordinated at times. They seemed to be impervious to all but the most powerful weapons and demonstrated the fascinating ability to self-repair damage at times and rise up to continue fighting. My team barely survived the encounter while Quint and Caerivus escaped during the fighting down one of the room’s other passages. Of the metallic constructs, no evidence remained- their broken and destroyed bodies seeming to have disappeared when they finally sustained sufficient damage. 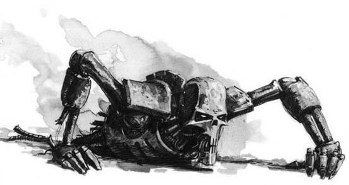 We continued in pursuit of our quarry, as well as searching for a way out, with the various corridors and rooms introducing us to more variants of the horrific metallic constructs. We fought many of the creatures, including ones that appeared to resemble strange armed serpents that could phase in and out of existence allowing them to pass through walls. Later we encountered a huge hovering spider-like construct tending to a large green gem that was inscribed in various symbols, which I suspect must be the written language of these Xenos creatures. This spider-like construct was accompanied by a huge centipede-like construct, as well as a humanoid construct that appeared to be a leader figure. This figure spoke in emotionless Low Gothic as it inflicted pain on the heavily injured form of Caerivus, who was laying at its feet, while Quint watched from the doorway of what was later discovered to be an exit; Quint decided to flee, leaving Caerivus to his fate.

I suspected that the large gem would be valuable in learning about this previously unknown foe, and dispatched my team to secure it and escape down the corridor used by Quint. Despite the devastating energy weaponry and regenerative properties of our foes, my team was able to secure the gem and flee down the corridor with the huge metallic centipede-like construct in pursuit. I am pleased to report that prior to leaving I was able to administer the Emperor’s justice on the traitor Caerivus with a point-blank inferno pistol blast to the face. 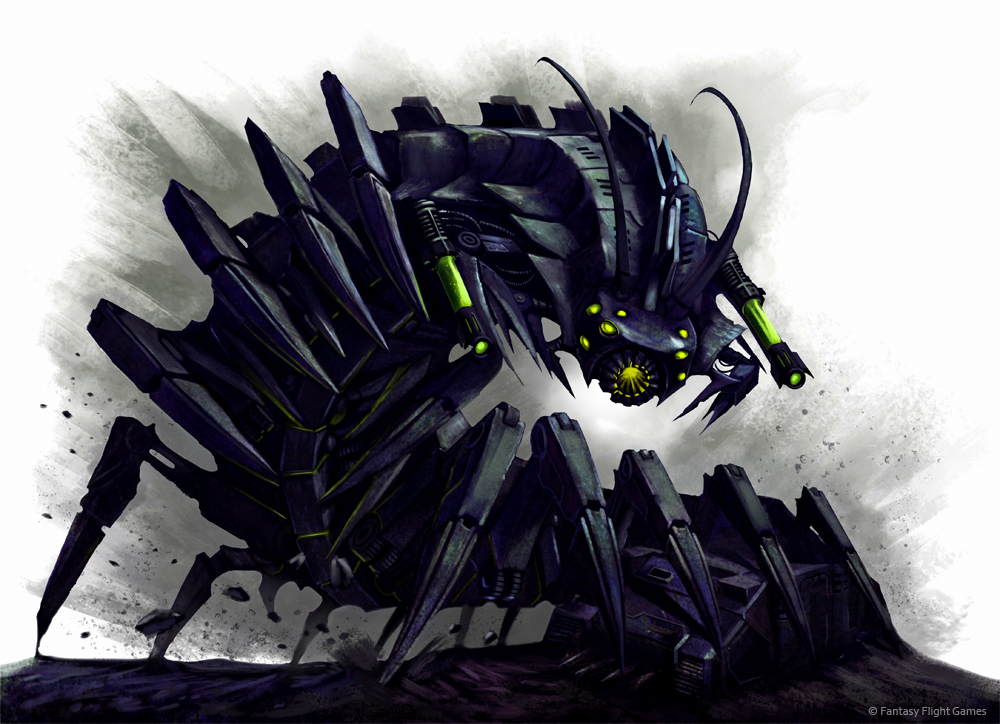 We were lucky to find that the corridor offered a way out in the form of a large crevasse, most likely created by the recent earthquake, that exposed the corridor to the open sky above. As we clambered out onto the planet’s surface, we were greeted by a guncutter (which I suspected was occupied by Quint), which sent a volley of missiles in our direction before flying away toward the nearby hive city capital. Luckily, my team and I were able to avoid the main blast zone of the missile strike, and injuries were limited to a few broken ribs and minor cuts. This same strike appeared to obliterate the centipede-like construct and collapse the crevasse leading to the underground passage. My team and I started back toward our lander not realizing that the worse was yet to come…

* GM’s Note: This mission was modified by the GM from the Fantasy Flight Rogue Trader adventure of the same name. It can be found “here.” *