In the underhive of Scintilla, Quint is almost assassinated by snipers from the Pressure Point mercenary group, after he purchases a data-stick containing critical information for his master. There is no doubt that their target was the Interrogator, but further investigation is stalled when it is revealed that the contract was anonymous and the individual responsible for providing the contract information to Pressure Point was just a patsy who was later found dead in a sewer gutter.

While Quint and other Inquisition agents look further into the matter, Inquisitor Sand takes several of his junior acolytes, under Hadrian’s supervision, to his newest project- the Arcadia, a restored Imperial Naval Sword-class frigate turned Rogue Trader vessel under the command of fledgling captain Rogue Trader Du’landra Melua. Inquisitor Sand briefs them that for the past several years, since the reemergence of Eramus Haarlock, he has been busy petitioning the High Lords of Terra to award Melua a Warrant of Trade. With the assistance of powerful allies from inside and outside of the Inquisition, Sand’s petition was granted.

Sand explains to his acolytes and Melua that this a mutual partnership with both entities providing a useful resource. Sand plans to expand his investigations into the Kronus Expanse and Melua hopes to gain additional power and wealth. But first, the Arcadia must be checked out to ensure all is working properly in a trial run of sorts, hence Hadrian’s presence. On the data-stick that almost cost Quint his life are a set of coordinates that lie in the forbidden Threnos Zone that will reportedly lead to the site of the long lost Imperial Olympic-class liner ship the Niveus Astrum, which disappeared over a millennia ago while enroute to Lord Militant Angevin with a valuable gift.

Under the guidance of Navigator Godwin, the Arcadia makes transit using the Warp without incident and upon arrival in the Threnos Zone, the ship’s Astropath, Kessa Silinus, is able to locate and follow the Niveus Astrum’s astropathic mayday chorus in the Warp. Their route takes them to an uncharted planet that they later learn is called Calamitus. Scans show that a large human population inhabits the planet around the wreck of the Niveus Astrum, which has crashed into the planet prow first and miraculously came to rest embedded in the ground like a spike into a board with its rear thrusters pointing skyward. 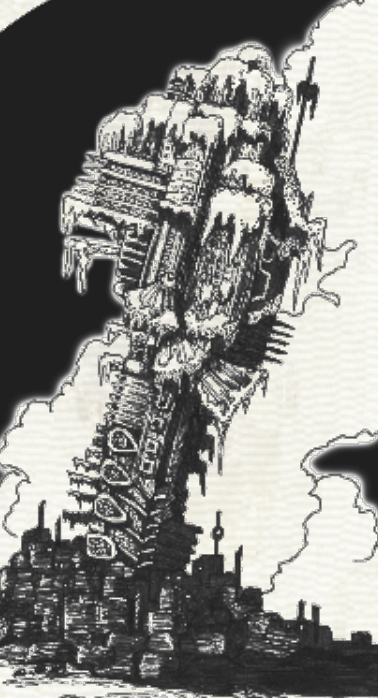 Taking one of the Arcadia’s landers, Hadrian, Jak, Jez, Bishop, Rylak and Lupus are dispatched to investigate. Despite sustaining some minor damage, the shuttle navigates the rough weather to land on one of the precarious makeshift landing platforms on the top (rear) of the ship. Immediately upon landing, the party is greeted by a welcome party lead by Arcpenny, a dignitary from the Ascendency, which the acolytes find out is one of the ship’s three controlling factions. Arcpenny is friendly and explains to the acolytes that the community on the ship is made up of descendants from the original crew of the Niveus Astrum. He also tells the acolytes that the community of the Niveus Astrum are an Emperor-fearing people but enjoy their autonomy from the Imperium and prefer to remain a secret. They are far from lost though, and Arcpenny tells the acolytes how their location is known to many traders, pirates and seafarers who come to Calamitus to buy and trade goods- this arrangement is beneficial to all.

The acolytes are taken to meet Montess Quess, the Chanteline (or Queen) of the Ascendancy and she welcomes them to her throne room, which has been converted from the bridge of the Niveus Astrum. Amongst the consoles, the acolytes note a large cubical shape among them that Quess tells them is the Vault of Beowulf, which is said to house a valuable treasure- the gift to Lord Militant Angevin. She also tells them that the Vault has never been opened and that it is sealed with a special locking mechanism that requires three special keys called Clavuses, which each leader of the three factions possesses as a symbol of their office. No one knows what the vault contains, or if it still contains anything because to date, the faction leaders could never come to an agreement over a claim of ownership of its contents.

The acolytes decide to explore the ship further; Hadrian is interested in acquiring knowledge of the ship from the days when it first crashed and Quess directs them to the lower levels of the ship where Director Vaunt, the Tech-Priest in charge of the manufactorum facilities on the ship runs his faction, the Vexillum. With Arcpenny as a guide, the party makes their way to the bottom (front) of the ship and find Vaunt’s compound surrounded by large angry group of labor protesters. While Hadrian attempts to negotiate with the protesters, Jez, Rylak and Bishop are able to sneak their way past the picket lines and to Vaunt’s control tower where they attempt to open a line of communication with Vaunt.

Meanwhile, Hadrian’s negotiations soon falter with the anti-Mechanicus protesters and the mob becomes frenzied for violence when Lupus unwittingly attempts to quell the crowd by singing a hymn to the Emperor, which only raises the crowd’s religious fervor and hardens their resolve. Ultimately this leads to a large number of the crowd meeting their deaths from the massive firepower possesses by Vaunt’s automated sentries and combat servitors when they charge the control tower and attempt a siege.

With the uprising suppressed for the time being, Vaunt welcomes the acolytes and Arcpenny into his tower for conversation and talk of opening Beowulf’s vault. An agreement of sorts is reached with Vaunt stating his intentions of joining the other faction members in opening the Vault but he believes that his faction should have majority claim over what lies inside. This outrages Arcpenny, who believes that the contents of the Vault should be shared equally amongst the factions for the benefit of the population of the Niveus Atrum, and he leaves with Bishop and Rylak to brief the Chanteline on what’s taking place.

The rest of the acolytes make their way to the holdings of the final faction, the Basilican Church lead by Reverent Laudius. Lupus speaks with the leader and convinces him to agree to participate in opening the vault but finds out that Laudius’ Clavus was stolen by Ratclip, one of the local gang leaders. Seeking Ratclip in the gang controlled slums of the Shank-Hill Platforms, the acolytes find the gang leader in heated negotiations with another gang leader inside a bar. Soon the argument becomes an armed standoff with the acolytes in the middle as members from both sides draw their weapons.

Past the point where talking would be of assistance, the bar erupts in gunfire from all sides, including the acolytes who shoot at both parties. In a matter of seconds it is over with only the acolytes and a wounded Ratclip emerging as survivors. Getting the Clavus, and sending Ratclip on his way, the acolytes make their way back to the top (rear) of the ship where they tell the Chanteline of their success with getting all the faction leaders to agree to open the vault.

It is decided that the unlocking of the vault will take place the following day during a grand ball. All of the faction leaders show-up as promised with armed escorts and a myriad of heavy weaponry. Many suspect that things will not go as friendly as originally thought. The moment comes when the vault is unlocked but unopened and before anyone can see its contents, each of the faction lay claim to the contents resulting in a tense heated debate emphasized by the display of weapons from all sides. Each of the factions make their arguments, but Bishop finally convinces all parties to agree on common ownership.

Without further delay, the vault is opened and to the delight and disappointment of various faction members, it is found to contain a data archive of cogitators, tomes and treaties of rare works of literature, poetry and social and religious discourse. Gathering their share of the vault’s contents, the acolytes decide to inform their master on what they found when they located the Niveus Astrum and let him decide the fate of its people.

* GM’s Note: This mission was ran with modifications from “The Glass Key" adventure by James R. Burrows. It can be found on the Fantasy Flight Games website “here”