“They are a scourge upon our galaxy, the most vile and sadistic of all our xenos foes, and a peril to any who would ply the void in search of profit or gain. Whatever happens, should the shadow of their ships darken your path, pray you die fighting at the helm of your vessel, lest ‘fortune’ favors you and they take you alive…”

Using his connections with a Dark Eldar named Akirvas, Inquisitor Sand has discovered that acolytes Quint and Pullo were captured and sold by a Dark Eldar Archon named Salaine Morn. Through Akirvas, Sand secretly contacted Morn and a deal was brokered that in exchange for safe passage from the Dark Eldar Webway city known as the Nexus of Shadows, the imprisoned acolytes would secure a Dark Eldar ship for Morn called the Soul Reaver, which is the flagship of the most powerful Archon, and current ruler, of the Nexus of Shadows, Archon Zaergarn Kul of the Kabal of the Splintered Talon.

Of course, conducting negotiations with Xenos, especially the Dark Eldar, is highly proscribed and most in the Imperium would declare Inquisitor Sand a traitor and request his immediate execution if they knew of these relations. Regardless of the danger, the Inquisitor has went forward with the rescue attempt, though those that know of the operation suspect that there is more than just the safe return of Sand’s acolytes in play here as whispers speak of valuable information that Archon Morn will provide to Sand once she receives possession of the Soul Reaver.

Inquisitor Sand has tasked acolytes Jak, Bishop, Jez, Silvain and a young teenage girl named Luck to prosecute this mission. This group has been given orders to locate and rescue Quint and Pullo, and then secure the Soul Reaver and turn over possession of the ship to Morn. The acolytes reach their destination by being transferred from Rogue Trader Captain Melua’s ship, the Arcadia, to Archon Morn’s ship, the Promise of Agony. Morn then takes the acolytes, in the guise of slaves, to the Nexus of Shadows where they are sold to the Wych Cult of the Withered Blade under the leadership of Succubus Anyalra. 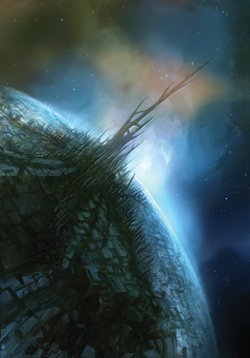 Their lives as slaves of the Withered Blade in the Shadowspine Pits begins with torment and pain as the acolytes join other captured slaves and proceed through a number of trials that test their fighting abilities and physical and mental fortitude. Many of their fellow prisoners are killed or maimed in the process and those that survive quickly lose hope as they realize there is no escape from their predicament.

Shortly after their arrival, the acolytes make contact with Quint, Pullo, and their new acquaintances- a squat named Kelson, Magos Domos (a most surely insane tech-priest that has been a prisoner of the Dark Eldar and served in the Shadowspine Pits for over two centuries) and a fellow slave named Gunn. With the additional manpower, Quint and Domos begin working on a plan to escape the Pits that is based on the recruitment of notable slaves to join in facilitating an uprising; a plan which has little chance for success, but provides the only option of hope at the moment.

In addition to the complications of enacting the escape plan, the group must also try to stay alive in conditions that are less than optimal. The acolytes quickly find that life is a commodity that is quickly spent if one does not have the skills to survive the arena fights, or the luck to avoid being selected to participate in them. Arena fights with wyches, murder servitors, Xenos creatures from across the galaxy and fellow slaves are a constant obstacle that they endure, and so far they have managed to survive (some owe their lives to the seemingly supernatural Medicae skills of Domos the Bloodsmith). Months pass by and the acolytes, and their allies, continue their work on solidifying alliances and planning their escape. Many that the acolytes approach are skeptical about the success of any escape plan. They are wary of a possible trap or question the resolve and dedication of the acolytes toward this endeavor and request that the acolytes perform an act to prove themselves.

In a strange twist of fate following an arena event where Quint and Gunn attempt, but fail, to turn the tables on their Dark Eldar captors, Interrogator Quint meets with a sultry ship captain named Coronnia who works for the crime bosses of the Kasballica and is heavily involved in the Cold Trade; she knows of Quint through his cover identity of Quartiz- a malifixer with ties to several criminal organizations, most notably the heretical tech-cult called the Logicians. Captain Coronnia’s meeting with Quint sets in motion events which lead to Quint’s release from the Dark Eldar and into the custody of Coronnia who has been tasked to transport him back to the Calixis Sector and turn him over to his superiors. Some of the acolytes voice discontent over this ironic turn of events that has allowed Quint to be freed while the rest of his party, including those that were purposely enslaved to rescue him, remain trapped as prisoners.

The remaining acolytes and their allies continue to fight for survival while pursuing potential alliances. Slowly their efforts begin to pay off and they are able to bring several powerful prisoners to support their cause, such as a powerful psyker named Nieja and a massive Ork Warboss named Gob ‘ard Head Green. Others await a suitable display of the acolytes resolve and power and word is put out to set up an arena bout between Jak and Succubus Anyalra’s wych champion, Hekatrix Bloodbride Unarlan. The fight is approved and many eagerly await the match up. Regardless of the outcome, the acolytes plan on beginning the slave uprising at the conclusion of the match.

Domos informs the acolytes that the Nexus of Shadow is built on an ancient human construct from the Dark Age of Technology called the Gaelan Sphere. Though it is unknown how the Sphere got positioned in the Webway, Domos and Kelson find that the Sphere’s machine spirit is still clinging to life deep in the Sphere and they are able to use it to manipulate limited parts of the construct, such as opening doors and turning gravity fields on and off.

On the day of the titanic battle between the massively strong Jak and the quick and skilled Unarlan the stands are packed. The moment the match begins Jak realizes that he is outclassed- 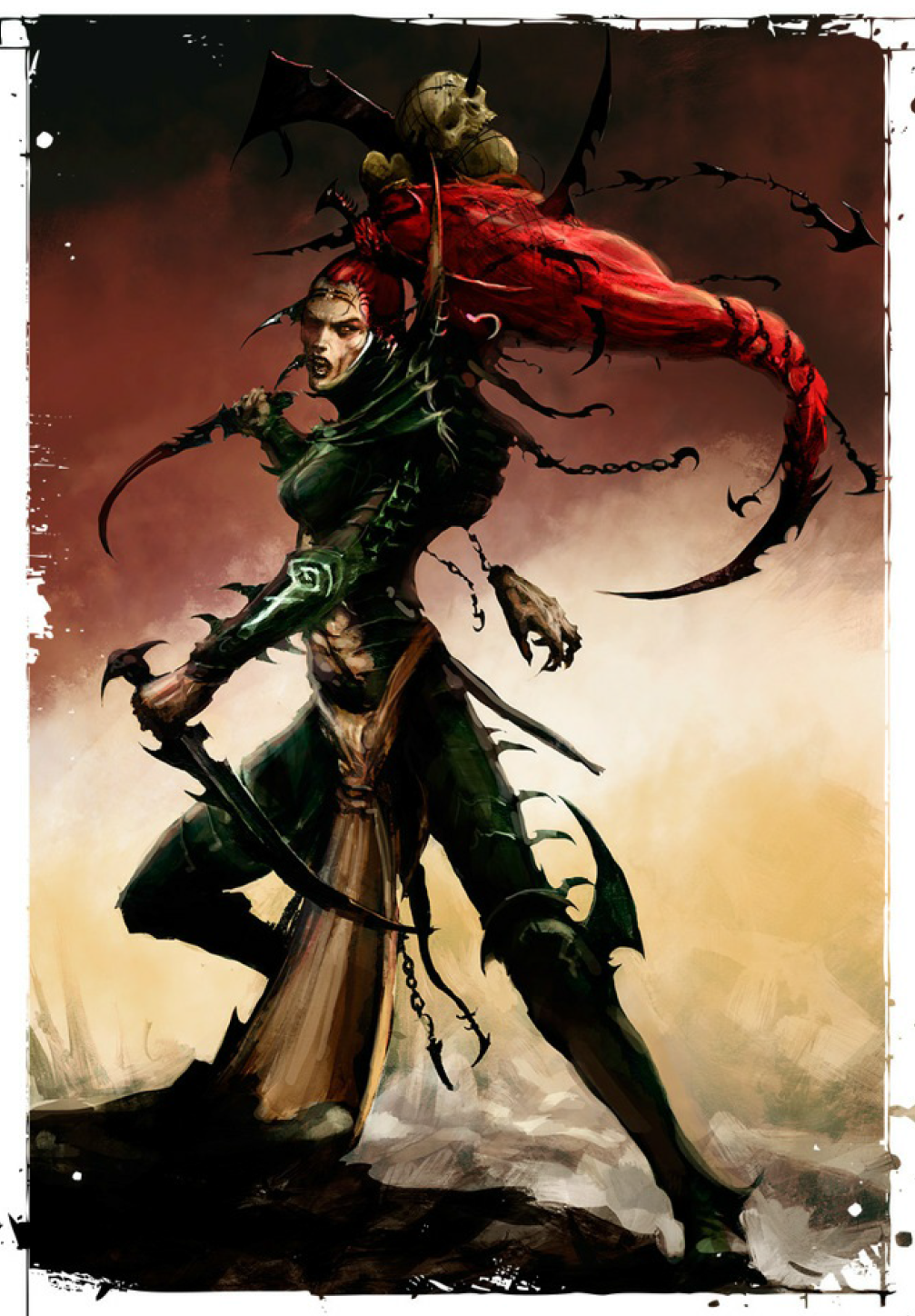 the wych is too fast and easily evades Jak’s powerful but sluggish strikes while delivering precision strikes of her own that artfully and playfully cut away at her opponent. Unfortunately for Unarlan, the hekatrix makes a slight misstep and Jak seizes the opportunity to deal a savage blow that stuns the wych and then proceeds to savagely tear apart her body with his bare hands and fling the pieces into the stands. A roar of approval, shock and anger comes from the crowd, which soon finds themselves fighting for their own lives as savage beasts and Xenos creatures that were in holding pens enter the stands courtesy of Domos and Kelson’s manipulation of the Sphere’s machine spirit. The slave uprising has begun…

* GM’s Note: This mission was modified by the GM from the Fantasy Flight Rogue Trader book “Soul Reaver.” It can be found here.