Kelsee lit a fresh ilho-stick as she watched the monitor showing the van containing another member of Rattling Cell depart the Cantus Sand Box, Maximus was his name- handsome, suave. Kelsee was a little sad to see him go.

The door opened and Lucius, the leader of the Inquisitorial Stormtroopers, entered. “We’ll be departing momentarily,” he told the Sand Box’s custodian, “My last trooper’s getting the van ready.” He looked at Solomon Gann sitting catatonic in his wheelchair, a trail of drool hanging from his mouth, his eyes open in a blank stare. “So, Interrogator Jaxx’s minions didn’t think any of them were a traitor? Not even this one,” he said motioning in Gann’s direction.

“Nope,” Kelsee said without a care. “It’s their call, I don’t care either way. It’ll be their arses on the line if they’re wrong.”

“Death would have been better than this,” Lucius said. “My family has served the Inquisition for six generations, I’ve heard, and even seen, what happens to those whose minds break from what they witness…death would be a release.”

“Death as a traitor?” Kelsee asked.

Both sat in silence watching Gann who continued his blank stare and drooling. The only indication he was alive was the slight rise and fall of his chest. Kelsee puffed on her ilho-stick. Suddenly, an explosion broke the silence. Half of the bank of security monitors turned to static.

“Breach, loading dock section,” Kelsee said to Lucius as the Inquisitorial Stormtrooper was securing his helmet and running out the room. Kelsee secured the door.

The sound of a hellgun could be heard as Lucius’ remaining Stormtrooper opened fire on whoever had breached the facility. Kelsee scanned the remaining functioning monitors, several armed figures dressed as manufactorm workers and down hivers were in the vehicle loading bay. Some already laid dead and the rest were exchanging fire with the Stormtrooper. Two figures, their forms a blur as they seemed too fast for the security cameras to track, or perhaps due to some personal anti-security countermeasures, briefly appeared on one of the screens. Kelsee tried to track the figures on the rest of the monitors with no luck. Another hellgun joined the fray as Lucius joined the fight. 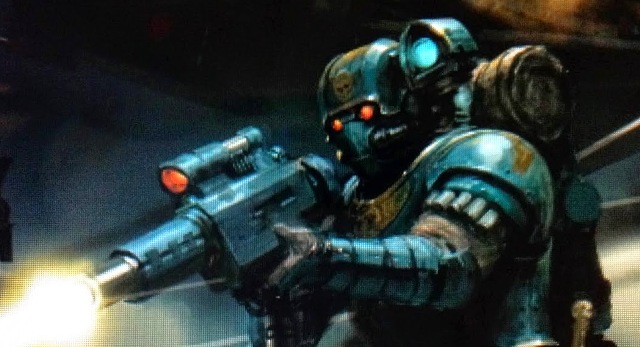 Gann remained inanimate as Kelsee calmly triggered the explosive charges set on the Sand Box’s secure inventory storage. The explosions simultaneously triggering the Sand Box’s panic alarm to notify Sand’s network. Kelsee knew that help would not come soon enough. The most she could hope for was that Lucius could repel the attackers.

Kelsee quickly scanned the security monitors to see the fight’s progress as she initiated the cogitators’ cleansing protocols. Lucius’ trooper was dead, as well as what looked like the majority of the intruders. Kelsee saw a blur pass one of the monitor screens converging on Lucius’ position and suddenly slow down, a lithe figure in a black body glove armed with a pistol in one hand and a sword in its other, mounted on one of its shoulders was a weapon mount for another projectile weapon. The figure unleashed double blasts of gunfire at Lucius who stumbled back from the volley clutching his right side. The lithe figure closed the distance with amazing speed, dodging a hasty burst from Lucius’ hellgun.

There was a thud on the door to the room and Kelsee snatched the hand cannon sitting on the top of the monitor banks and aimed at the door. Gann sat motionless, unblinking. Chancing a glance at the monitors, gun still trained on the door, Kelsee saw Lucius dead on the vehicle bay floor, some of his bloody intestines laying next to his body. Beside him lay the body of the body gloved figure with Lucius’ power sword buried in its chest. Kelsee suddenly noted it was quiet. Nothing moved on the monitor. Nothing looked alive.

Seconds. Minutes. It seemed like hours passed as Kelsee waited, gun trained on the door. Her ilho-stick burned to her lips and she cursed in pain as it fell from her mouth. A hole suddenly appeared in the study metal door where the locking mechanism was located, the metal edges fused to slag by intense heat. Kelsee fired in reflex, her shot making a small dent in the door.

In return a shot came through the hole in the door, striking Kelsee’s hand cannon and knocking it from her hands. The door opened as Kelsee scrambled to find her gun and cover. A figure entered the room, its form blurry as if vibrating at high speed. Suddenly the figure came into focus, no longer a blur.

“Quint…” Gann said under his breath. “Quint!” Gann shouted as he started gnashing his teeth, spittle flying from his mouth.

Quint regarded Gann with an impassive stare, “Looks like no one knows. Now no one ever will” he said firing his inferno pistol at Gann’s face.

* GM’s Note: This mission was ran with modifications from The Delta Green scenario of the same name by Greg Stolze. It can be found on the Drive Thru RPG website “here”.