On behalf of Inquisitor Sand’s old alma mater, the College of Hetaireia Lexis on the planet of Scintilla, one of the Inquisitor’s old professors (and dean of the Lexis Maxima), Magister Loremaster Cornelius Wright, has requested Inquisition assistance in investigating a strange and perplexing matter in recent months in which standardized experiments on campus have resulted in abnormal results with no explanation; this phenomenon appears to be only limited to the Lexis Maxima campus in Hive Sibellus. The abnormalities are severely hindering research projects since known effects are no longer standard.

Interested in helping his old friend, but still preoccupied with his search for Interrogator Quint and other matters, Inquisitor Sand dispatches a team lead by one of his senior acolytes, Magos Vern (the rest of the team members include Lupus, Bishop and a newly acquired acolyte from the Penal Legion that goes by the nickname of Flak). In addition, Vern decides to take the added firepower of a gun servitor just in case.

Upon arriving at the Lexis Maxima, the acolytes are set up with quarters and the faculty extend whatever assistance they can provide to resolve this matter. Vern conducts some experiments of his own and confirms that standardized chemical reactions and other known results are not happening. The rest of the acolytes spend their time interviewing other faculty, including a Loremaster named Kale who is currently being treated in a sanatorium on campus that is run by an order of the Sisters Hospitalers. Kale proves to be suffering from some type of psychosis and he believes that the strange black birds on campus that look similar to crows are the cause of the anomalies. 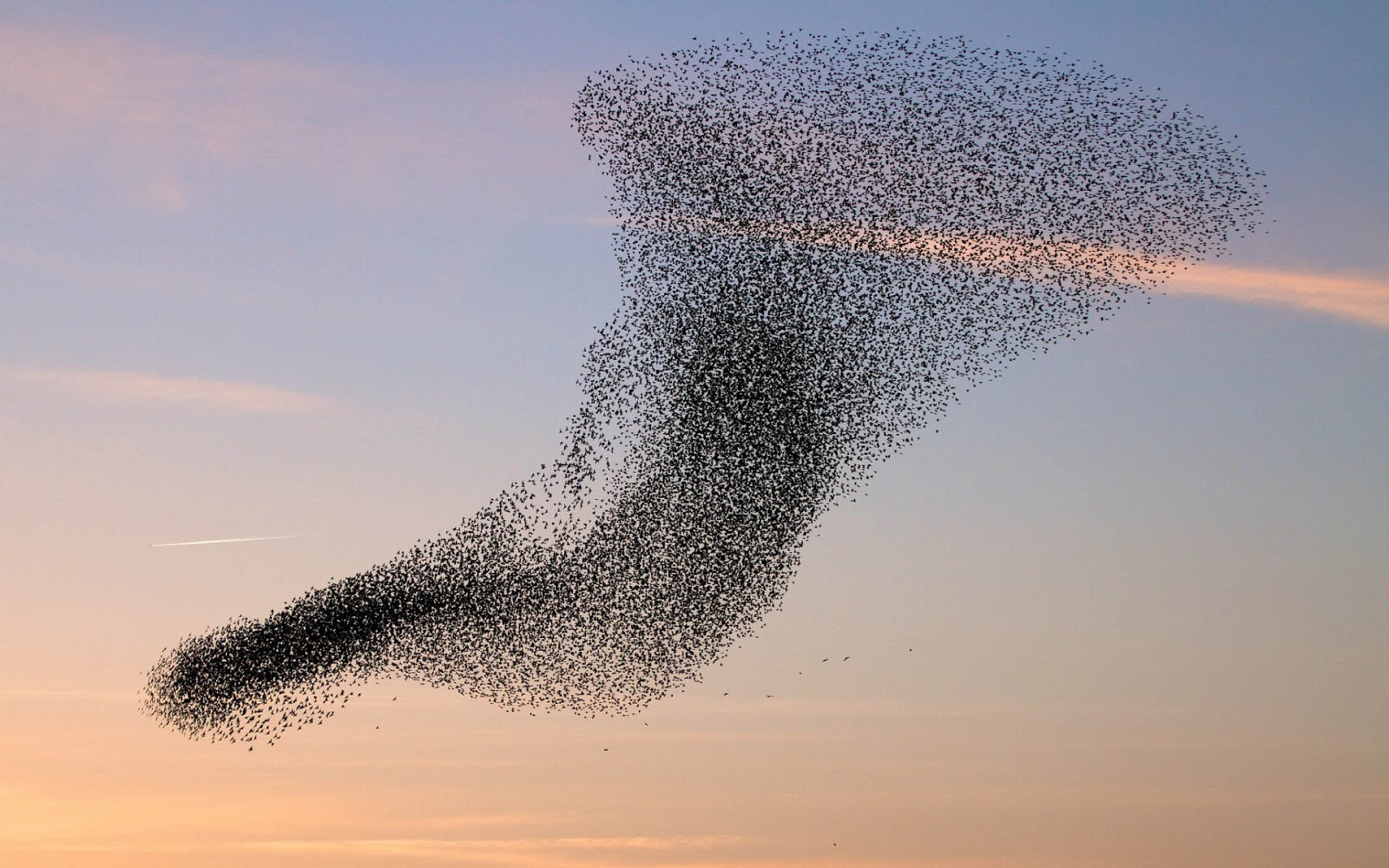 The acolytes note that there are hundreds of the black birds perched on buildings and trees throughout the campus and they always move together in a flock. Lupus and Bishop start getting the sickening feeling that the birds are watching their every move, and during the night, their dreams are filled with the ever watchful forms of the birds. The feeling of their constant gaze starts to wear away at their sanity and they each begin to subconsciously trace a strange spiral pattern with their hands, the same distinct pattern that they have noted the birds always using when they fly up into the sky.

Intrigued by this strange bird theory causing the anomalies, Vern tasks Lupus and Flak to secure a specimen for analysis. On the high roof of one of the campus’ buildings, the pair try to lure a bird with food with no success. It is only when Lupus decides to shoot one with his crossbow that the normally passive birds react violently and attack Lupus en masse. Despite being seriously wounded, and almost falling to his death, Lupus does kill one of the birds and brings it back to Vern.

Vern conducts an autopsy on the animal and finds a strange physiology inside- the bird is not of any known species, and more disturbing, some of its internal bones and organs appear to be from a variety of species, including humans and dogs. Even stranger is the absence of blood, and instead there is a black caviar-like substance that holds the insides together. 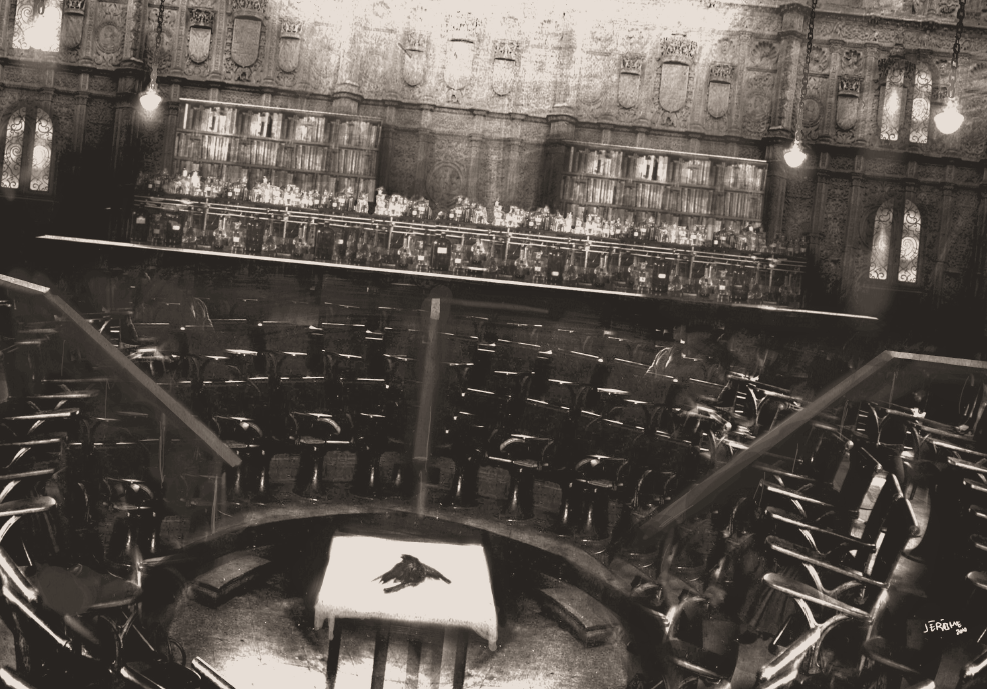 The group decides to each utilize their scholastic and forbidden knowledge to comb the source material in the libraries of the Lexis Maxima. In addition, they pay a visit to the College’s premiere ornithologist on birds across the galaxy, Loremaster Juliann Nott. Nott tells the acolytes that the black birds are not native to Scintilla (or any other known place) and were in fact brought to the College over twenty years ago as a pair by a previously employed Loremaster named Sieger. Sieger has since left the employment of the College and his whereabouts are unknown. It is believed that his pair of birds bred and the flocks on campus are their offspring.

Additionally research reveals the following: 1) Lupus recognizes Sieger as a Churirgeon that used to work at a manor house that was purchased by Inquisitor Sand; it was later found that Sieger was a Chaos cultist for the Eldritch Order of the Unblinking Eye and he fled Imperial authorities while the rest of the cult were being terminated. 2) The bird’ spiral pattern is similar to the symbol of the Chaos power of Tzeentch and there is a numeric significance present related to the number “9.” 3) It is believed that the birds are related to the Warp and a theory is developed that as their numbers increase, they weaken the veil between the Warp and realspace (thus the abnormal experiment reactions) and left uncheck, a tear in the fabric of reality will happen. 4) There are reports of similar types of birds near a remote frontier city outside of Hive Sibellus called Rydal.

The acolytes’ investigation is not without complications though, as a power play between Vern with his Inquisition authority and the Sisters Hospitalers and their Ecclessiarchy authority creates a situation in which both groups get higher powers involved. Inquisitor Sand and Inquisitor Baspherone both personally respond to ease tensions and negotiate a working relationship. The potential Warp threat that the birds create cannot be ignored and it is decided that Inquisitor Baspherone will oversee an operation to have Sisters of Battle Retributor Squads armed with flame weapons destroy the birds on campus while Vern and his team continue the investigation in Rydal.

After requisitioning a Valkyrie transport, the team secretly lands on the outskirts of the town of Rydal and approaches on foot. They find that the black birds are indeed present, in considerably more numbers than they were at the Lexis Maxima. They find the townsfolk to be quiet and melon collie and they are mainly miners that work the network of mines that surround the town. The team learns much from a local named Vincent who is not a priest, but is caretaker of the town Church; he tells Lupus that the Ecclessiarchy has not sent a new priest to take over since the last one drowned in the nearby lake over twenty years ago. The acolytes also learn that the town’s women are being plague by a madness in which they take their own lives, which is why there are few woman in the town and the area is shunned by travelers.

After securing room and board at a local inn called the “Green Man,” Lupus and Flak make additional inquires to people but find little useful information other than not many actively worship the Emperor in the area and the strange birds are in abundance but not dangerous. Lupus and Flak do get involved one night in helping Vincent save his daughter from taking her life on a strange stone that sits outside the town- a stone with strange occult engravings that has a local history as a suicide location. 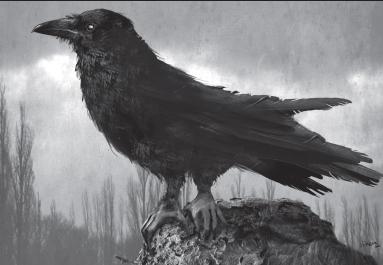 Deciding that the mines might hold the answer, the group makes inquires for a local guide to take them where there are reports of strange phenomena and a miner named ‘Ol Ned agrees to provide his services for hire. Early the following day, ‘Ol Ned takes the group to an old series of mines near a place called the Longhrigg Quarry. Inside is a maze of tunnels that ‘Ol Ned seems to know how to navigate that takes them deep underground in the dark. The tunnels appear to be a nesting place for yet thousands more of the black birds who lay asleep on the walls ignoring the group’s progress. Hours pass by as the group goes deeper and deeper into the earth, and eventually they arrive at a section where the barrier between realspace and an unknown Warp world is permeable. Strange sights and creatures can be seen on the ever fluctuating tunnel walls of the mines and further exploration leads the acolytes to a bright pillar of light in a dead end cavern.

The acolytes find out almost too late that they have been set up and local cultists open fire from the cavern, nearly killing Flak. The acolytes regroup, and using the cover of a tossed blind grenade, they conduct an assault. With the group momentarily split up, ‘Ol Ned, proves to be a cultist as well and launches a surprise attack on Bishop with his chainsword while Vern and Lupus are in the cavern attacking the cultists let by a rogue psyker that is a local shepherd. What follows is an intense battle between the acolytes and the cultists, who are supported by Tzeentch Flamer daemons that emerge from the pillar of light, which appears to be a gateway to the Warp world that is anchored by a strange inscribed stone in the light pillar.

Despite the daemonic horrors and psychic assault, the acolytes are victorious in terminating the cultists and destroying the Warpstone anchor, but the destruction of the stone unleashes one final surge of power as the thousands of birds in the mine attack the acolytes. The aftermath finds the acolytes barely alive and in serious need of medical attention (Flak lost his left eye to the birds), but all the birds in the mines and town are found to be dead and the taint in the area appears to be gone.

* GM’s Note: This mission was ran with modifications from the Trail of Cthulhu adventure, “The Watchers in the Sky" by Graham Walmsley. It can be found on the Pelgrane Press Ltd website “here.”