Tech-Priest of the Adeptus Mechanicus (now deceased) in command of the Imperial Observation Station Tiberion Station, which is in orbit over Orbel Quill.

Hunched over Tech-Priest wearing the red robes of the Adeptus Mechanicus, Karanov is in charge of the daily operations of the Imperial Observation Station “Tiberion Station”.

A personal friend of Inquisitor Sand, Inditor Adept Karanov was the Tech-Priest responsible for the daily operations of the Imperial Observation Station known as “Tiberion Station,” which is located on the polar moon that orbits Orbel Quill. Inquisitor Sand’s Acolytes of Cell C2 become involved in the investigation of Tiberion Station after communication is lost.

The Acolytes’ investigation finds that the Station has been infested with a Xenos parasite that takes control of its hosts and all of the Station’s personnel are either infected or dead with the exception of Karanov, who has gone mad from the incident. Once the Station has been cleansed, Karanov died shortly afterward under suspicious circumstances involving a malfunctioning medical servitor. A review of his personal journal by Inquisitor Sand showed that Karanov was aware of some classified operation, called the Anphelion Project, taking place on the Death World of Kenov III. The investigation of Kenov III by Cell C2 introduces them to a conspiracy involving illegal Xenos experiments sponsored by elements within the Imperium. 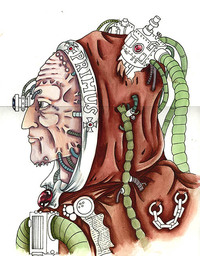