A fit dark-haired man with a stern gaze. His most notable feature is his missing left ear.

Xerxes grew up in the lower parts of Icenholm on the planet of Sepheris Secundus where he learned and honed his skills in the service of one of the local barons. Life was good but that all changed one day when Xerxes accepted a contract to kill a local nobody. When the act was done, Xerxes later found out that the nobody was actually a high-ranking family member of Queen Lachryma III’s own family- a grand niece. She was in disquise to visit a lover that she had been forbidden to see.

In fear for his life, and rightfully so, Xerxes spent his life savings to flee the planet. Changing his name to Cain, which was a name from his hurtful past- a past in which his family was murdered by the soldiers of one of the local barons.

Fearing the long reach of the nobility’s forces, Xerxes presented himself to the Inquisition offering to exchange his “services” for a certain level of protection and ambiguity. So far, Xerxes has proven to be a valued asset in the Emperor’s War against the heretic, mutant and the alien, but he is always bothered in the back of his mind that those from his past will come knocking. 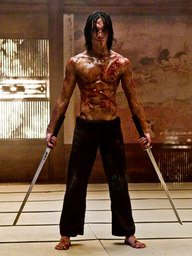