As Aoner fell to his knees, his exhaustion and many wounds taking their toll upon his battered form, he cried out his rage for the loss of his battle-brothers to the foul silver bodied demons. Finally succumbing to his wounds, Aoner was granted a vision of what had brought him to this point by the All-Father.

It is said that Aoner first saw visions of his childhood, from so many centuries ago. Bright and happy visions of his parents and clan. Foggy visions of battle. And finally, through the fog, the definitive sight of a Wolf Priest striding towards his broken body.

At the great fortress of Fenris, Aoner saw himself as he first began his training under the watchful eye of the grizzled RunePriests. Then he was among the stars in his first Great Company, learning the histories and stories of it. With valour and distinction did he serve on the battlefield, and it was with wisdom and forethought that he served next to the Wolf Lord, helping to guide his actions. And so it continued for many years as Aoner made his way through most of the Great Companies.

Young Aoner proved particularly adept at battling the xenos incursion, regardless of the form it took. Many were the times when Aoner would give timely advice, thwarting the threats and schemes of the xenos.

In a flash, Aoner was transported back to his battle barge. Standing in the bridge of the battle barge, next to him stood Wolf Lord Folkvar.. The fateful message began streaming to the viewscreen. A planet under our protection, the mighty Space Wolves, had suddenly and without warning stopped all communication. With this news Folkvar commanded the battle barge to change course to this planet.

Doomed Aoner courageously volunteered to lead a force to the planet. Many of his brothers also boldly stepped forward to descend to the planet. With such a valiant force, how could our brothers do naught but succeed?

They searched the planet thoroughly, but it was as if everyone had just vanished. Even the great trackers of the group could find no sign of them. After many long hours of searching, Aoner halted the search close to a cave system and began to cast his mind into the warp as a last desperate effort to find some sign of the missing people.

It was while Aoner was lost in his trance that the foe struck. Silently and stoically they descended upon the doomed force, these metal monstrosities that would later become known as Necrons. So lost in the winds of the warp was he that Aoner was oblivious to the end of his packmates, coming out of his trance and seeing most of his packmates were already taken.

Furiously he struck, commanding the planet itself to attack these foul mechanical constructs with great bolts of lightning. Pulling his weapon free, courageous Aoner charged into their midst, receiving and giving blows in equal measure, only to have the remaining few phase out of existence, his charges in tow.

It was in this way that he was found, wounded and madly muttering. Back on the battle barge, Folkvar had the Wolf Priests care for our wounded brother. For many cycles, Aoner lay close to death, but he fought his way back, realizing that it could only be by his efforts that his vanished battle-brothers could be saved.

Upon awakening, Aoner began fasting and praying for guidance. Eventually, Aoner was given the information he was seeking. By being placed in the Deathwatch, he was told, he would be given a chance to find his missing battle-brothers, and possibly a chance to redeem himself. This is the true beginning of the saga of the legendary Aoner.

-Excerpt from the Saga of Aoner 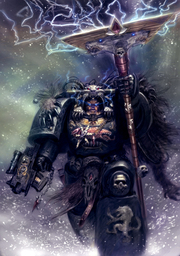