One of the near mythical augmented warriors of the Imperium. Space Marine Brother-Sergeant Agamorr’s black power armor is clearly ancient with carefully maintained ornately inlaid plates. On of his shoulder plates bears the cyberskull cog of the Ordo Xenos Deathwatch; the other is marked with a pair of ornate crossed thunderhammers, the symbol of his chapter- the Hammers of Retribution.

Brother-Sergeant Agamorr is just short of two centuries in age, though the few beings he meets without his helmet on would never guess this by appearance alone. Agamorr has served the Deathwatch for just over three decades, his standard original ten year tour of duty was extended when it was discovered he has a knack for killing unusual xenoforms. Agamorr is straightforward in both his words and deeds. He seldom hesitates once he has chosen a course of action and his speech is often directly to the point.

The Acolytes of Cell C2 first meet Agamorr when he joins their group in the investigation of the Space Hulk- “Twilight.” The Acolytes owe a large part of their survival to Agamorr’s rescue at the end of the mission when the Acolytes take on a large raiding force of Dark Eldar.

A year later, the Acolytes again join Agamorr and other Marines of the Deathwatch when they investigate and assault the secret research base located in the forbidden Threnos Zone. Again, Agamorr and his fellow Deathwatch Marines display the heroic combat prowess and legendary endurance that Space Marines are known for when they take on a well-trained and equipped force that outnumbers the Marines and their allies. 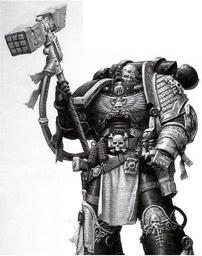