A veteran Cadian Officer stationed in the Eye of Terror.

A hardened Cadian veteran of countless battles against the Imperium’s many enemies.

Captain Kealis Zael was Mir’s platoon leader while he served with the Cadian 701st. A brilliant and inspiring leader who cared for his troops, Mir and Zael survived many deadly encounters and each owes the other his life many times over. When orders came down that Mir was being assigned to another unit, Zael gave his battle brother his personal custom-made bolt pistol as a parting gift. The two friends still maintain contact though the vast distances between them make communication infrequent at best. 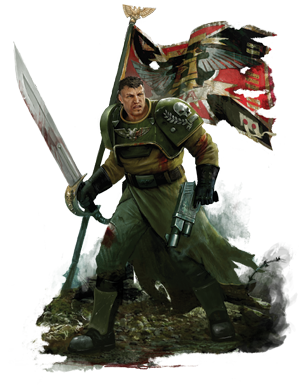