On the remote planet Chataar young child’s mother betrayed his father after becoming involved with members of the Fallen. Two of the black armor clad traitors ambushed him, and while he managed to fend off the attack and kill one of them in the process he was stabbed in the back by his wife. The child rushed to his father’s aid but was beaten back.

Before his fate could be decided, a squad of Dark Angels arrived to finish off the remaining Fallen and crucify his mother for her betrayal. Some of the squads members believed the child should be destroyed as well, but for whatever reason their commander decided to honor the boy’s father by allowing him to take the trials to join their ranks. While the boy’s name was lost, and his family’s name now corrupted, the commander took to calling him by the name of his father, Dante.

Due to these events as a child, Dante has grown up expecting betrayal at every turn. This has made him paranoid and lacking all sense of mercy for the wicked. The compassion shown to him by the Dark Angels however, has instilled in him a great admiration and devotion to his brothers and the emperor. As such he has very simple morals, either something is good and must be protected, or it is evil and must be destroyed.

Due to these morals and his conflicted nature about the events surrounding his past, Dante grew into a powerful and fearsome warrior, charging into battle to protect his brothers and wipe out their enemies. He faces corruption without fear and without mercy, and on more than one occasion his paranoia helped keep himself and his brothers alive, earning him great honor among them.

Dante is a very self contained person, often mistaken as shy or introverted, but this is simply his way of coping with the inevitable betrayal he expects from strangers. He will often put on a facade going so far as too tell a joke or two as an attempt to put those around him at ease so as not to alert them to the fact he is watching them and knows of their true motives. Highly mistrustful of any strangers and will often approach cautiously with drawn weapons.

Dante never made it into the ‘inner circle’ of his Chapter, but the results of his childhood have left him with some knowledge about the existence of the Fallen and their relationship to the Dark Angels. His goal of exterminating any and all who would stand against the Emperor, is second only to his need to track down any of these Black Armor Clad traitors and punish them. This is why he has joined the Deathwatch, believing it the quickest way to accomplish both goals. 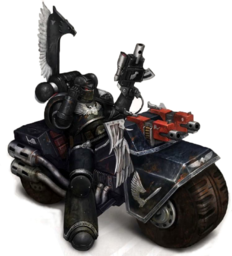