Lady Melua is a young, intelligent and strong-minded noble woman of Malfian-birth. She is often clad in the cutting edge of Malfian fashion and elegant rings on nearly every finger.

Lady Du’Landra Melua was born to a wealthy noble family on the Hive World of Malfi and her bloodline is distantly related to the House of Haarlock. Despite her family’s wealth, Lady Melua proved that she was independent enough to make it on her own and struck out to make a name for herself in the mercantile field of clothing- catering mainly to the wealthy and powerful in the sub-sector; her business success has made her independently wealthy.

While a successful business woman, because of her family and personal background, she was unfamiliar with the darker side of the universe and this would become terribly clear when, despite her father’s wishes, she struck out on her own to the planet of Quaddis to locate her beloved brother who, she later found out shortly after arriving, had been taken there after being abducted by Chaos cultists of the Pilgrims of Hayte.

The planet of Quaddis was involved in a massive celebration for the Festival of Tattered Fate, which was secretly the backdrop for competing factions that were interested in the Festival for their own malign purposes. Totally out of her element in these conditions, it was only due to meeting and joining with the Inquisitional Acolytes of Red Cell, who were investigating on Quaddis with Lady Me’lua’s brother, that Du’Landra was reunited with her brother (briefly before his murder) and was able to survive the terrors that transpired during the Revel of Darkness.

Since these events, Inquisitor Sand has taken an interest in Du’Landra and her infamous bloodline and has involved her in some plans of his own. 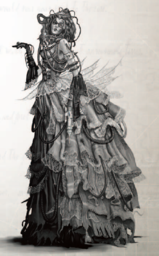