Lieutenant in the Kabal of the Splintered Talon.

With a shaved head and unmarred face, Dyrac’s body from the neck down is covered in a number of tattoos that advocate his dedication to the Kabal of the Splintered Talon. He is easily recognized by the distinct suit of armor he wears that is adorned with the bones of countless victims.

One of Zaergarn Kul’s favored lieutenants, Dyrac Nyr spends much of his time in the Shadowspine Pits in the Nexus of Shadows after his Archon began what Nyr sees as an over-long period of seclusion, either watching the games or partaking in the pleasures of the house to pass the time. Cruel and fickle, Nyr has been known to test his combat skills or wet his blades on anyone that wanders too close should the mood take him. He is dangerous and unpredictable.

Recently, with the destruction of his master, Archon Zaergarn Kul, and Kul’s flagship, the Soul Reaver, during an attempted coup by the rival Kabal of the Shadowed Thorns (under the leadership of Archon Morn), a treaty of peace was established after much bloodshed between the Kabals with Dyrac stepping up as the new leader of the Kabal of the Splintered Talon. Both Kabals currently hold joint power of the Dark Eldar city the Nexus of Shadows in an uneasy peace. 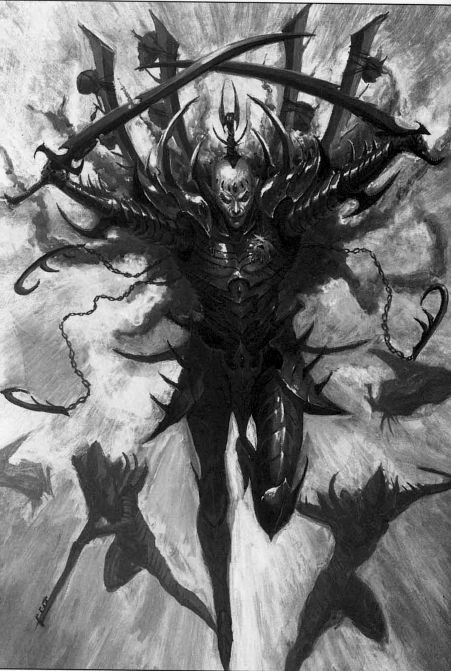