Second-Ranking Arbitrator on the Planet of Sinophia

A tall slim young man with dark eyes and blonde hair. He is often seen attired in a black armored greatcoat armed with a low-slung bolter.

Raised in the Schola Progenium, Fihad’s personnel files notes him as a brave, loyal and faithful follower of the Imperium and uncompromising enforcer of the Emperor’s Law. Though still young in his career, Fihad possesses a keen intelligence and rumors from Adeptus Arbite command in the Calixis Sector lead one to believe that Fihad’s posting on Sinophia may influence and work toward stopping the downward spiral of corruption on the planet.

Recently arrived on Sinophia, Fihad’s primary role was to act as adjudant to the commanding officer of the Arbitrators on Sinophia, Precinct Marshal Skarman, but shortly after his arrival Constantine would take over as head Arbitrator on the planet once the Inquisition discovered that Skarmen was under the influence of a daemon and attempting to free the entity from its imprisonment in Haarlock’s Folly. The Acolytes of Cell: C15 were also assisted by Fihad during their investigation of a noble family on the planet of Sinophia that was involved in the worship of Chaos. 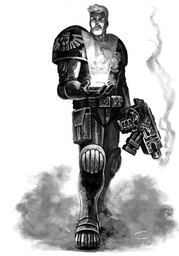