Grizzled old veteran of heralding from the Space Wolves Chapter. His face is covered in long white hair and a long white braided beard.

“That press is an affront to machine spirits! Honor them the old fashion way, with a hammer and the sweat of your brow.”

This Iron Priest has been the Forge Master of Erioch since his predecessor answered a summons to serve the Achilus Crusade a decade ago. While the inluence of Greyweaver’s time in the unorthodox halls of the Deathwatch shows in his servo-harness and the other small deviations from the traditions of the Isles of Iron, he is not nearly close enough to teaching of Mars as many of the Techmarines who serve under him wish.

The Iron Priest has adorned most of the fortress’s major workshops with icons of the Iron Wolf, and rivers of molten metal flow through his domain deep in the heart of Erioch. He is notoriously intolerant of other Chapters’ brands of tech-craft, but his efficiency in conjuring the tools of war is so great that no one has yet been able to ooust him. His fervent hatred of alien technology puts him at frequent odds with Inquisitor Quist. Every piece of xenotech adopted into the Deathwatch arsenal has since his arrival has been so grudgingly. 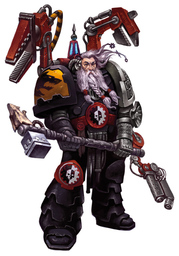