"Some say they've been through hell, but for me it's not merely an expression... I've survived the worst this galaxy has to offer, and I'm never going back."

Minor Disorder: Visions and Voices (see and hears two of his fellow prisoners from the Shadowspine Pits, Rucker and the Relhadhar, who both died during what would ultimately be a successful escape attempt)

Malign Sight: (-6 Per) The world seems to darken and dim if Gunn looks at anything too long. He wears tinted glasses in order to help compensate.

Hatred: During the events in the Shadow Pits, Gunn Developed an implacable hatred for the traitorous Heneris and his unknown patron.

The Street Life:
Born unwanted and unloved in the back alleyways of sector Valiant, a highly restrictive quarter of Solomon’s super-continental hive, Gunn spent the majority of his life enduring fierce hardships. Vicious gangs, corrupt enforcers, and unerring thieves tormented the young guttersnipe every day. Gunn met every challenger head on, and while he suffered his fair share of defeats, he always got back to his feet to face the next day’s horrors. Due to the strict ban on firearms within the sector, the unwashed masses were forced to use improvised weapons and their bare fists against each other. By the time he was six, Gunn already had experiences swinging a sword against his opponent.
While the boy managed to avoid the gang-life by scraping together a meager existence as a part-time mechanic in some of the local slum garages, he was by no means safe from the fiend’s torment. Often times he would be forced to face five or six opponents in armed combat at once, and his skills in combat quickly flourished because of it. However, the existence in this hell on earth was too much for him, and at the age of nineteen, Gunn seized his chance to escape. He sneaked aboard a leaving shuttle and thought he was saying goodbye to his pain forever.

The Black ship:
Gunn didn’t truly understand the scope of his misfortune until he realized the shuttle he was on was transporting fresh cargo aboard a nearby black ship. With nowhere to turn, Gunn found himself trapped along with thousands of psykers, destined for holy Terra. The ship had been away from Solomon for less than a week before the unthinkable occurred, a catastrophic breach allowed a few psykers aboard to open their minds to the warp. The effect caused a cascading surge of power to erupt across countless psykers, opening up a portal to the warp and flooding the ship with all manner of psychic torment, warp entities, and even a devastating demonic creature.
It was over a month after losing contact with the ship before the first Inquisition strike team arrived and boarded the drifting vessel. They were vastly unprepared for the carnage which awaited them. Mounds of stripped flesh and seared bodies littered the bloodstained decks of the ship. The crew had fought bravely against the encroaching horde, but in the end, every living soul aboard was overrun and slaughtered by the creatures. Tracking the path of destruction wrought by the demon, the strike team descended deep into the bowels of the ship. What they discovered shocked them.
The demon dead lay in a pool of its own blood, its severed head resting on the floor a few meters away. Standing over the body was a half-naked boy, wielding scavenged blades and covered in a mixture of both his own blood, and the blood of the creature. Unable to tell friend from foe in his exhausted and blood-crazed state, Gunn advanced on the group immediately. The members of the strike team were forced to subdue and incapacitate the boy, in order to stop his madness and save his life.

The Inquisition:
Word of Gunn’s actions quickly spread, and it didn’t take long for members of the Ordo Malleus to take possession of the boy. Under their care, Gunn found himself traveling along with other initiates aboard a chartist vessel, bound for a training facility across the sector. For the first time, Gunn felt he had finally put the horrors of the past behind him. But fate is fickle, and it often times smiles on the ill-fortuned just before striking. This was only the beginning of Gunn’s torment, and would soon find that the life he left on Solomon was paradise compared to the horrors which awaited him in the rest of the Calixis sector.

Shades of the Past: 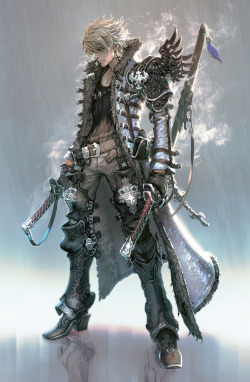