Born in the void, upon one of the great trading ships that ply the emptiness between the stars, Hadrian grew up surrounded by technology. An able and curious student, he was happy growing up under the tutelage of the various specialists aboard the ship. Always his curiosity drove him onward, ever learning and mastering any piece of technology he could. It was this insatiable curiosity that finally compelled him to leave his home and join the Adeptus Mechanicus. This was a significant turning point in this now young man’s life.

Life on planet took some adjustment for Hadrian, life in the Mechanicus took even more. While he certainly revered technology, the necessities of shipboard life had left him with a more practical view of it than his new brethren. This led him to conflict with the more traditional students and Magos. Truth be told a lesser talented individual would have been cast out of the Mechanicus. Hadrian showed promise, however. No one could deny there was brilliance in him and it was this that gained him enough support to continue his studies. Still, it was a rough road and Hadrian was frustrated by the restrictions that came with being in the Mechanicus.

Finally Hadrian pushed one boundary too many, and was caught with information pertaining to archeotech that was forbidden to one of his rank. His burning curiosity led him into the position of being expelled from the Adeptus Mechanis. There was still the formality of a trial of course, but it seemed to be the only result possible. Hadrian despaired. Then, an opportunity that he would never have foreseen came to him. Magos Genetor Faust, one of his supportive mentors, delivered a letter to him. Hadrian was now in the employ of Inquisitor Sand. He would not be expelled from the Mechanicus but would be attached to the Inquisitors retinue. He had been recruited for the exact same talents, and curiosity, that had him butting heads with his brethren in the Mechanicus.

The future was looking up. 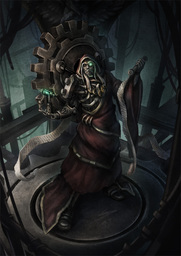