A False Prophet of the Chaos cult- the Pilgrims of Hayte

A handsome man that hides his face behind a silver heron mask crowned with a spray of metal feathers.

A master sorcerer and one of the leaders (who are called False Prophets) of the Chaos cult Pilgrims of Hayte, The Beloved has been spotted recently on two planets of the Calixis Sector, Quaddis and Mara, where it appears that he his leading cult operations that are related to the prophecies of Eramus Haarlock’s return. On Quaddis, his plan to harness the power of the Tyrant Star Komus- The Tyrant Star was stopped by members of Red Cell, but he managed to escape with remains of a powerful servant of the Haarlocks called the Widower (for what purpose the remains serves is unknown at this time). A few years later, he was again encountered by Red Cell deep underground in the abandoned prison complex on Mara. His forces were defeated but again Heron Mask was able to escape. His current whereabouts are unknown. 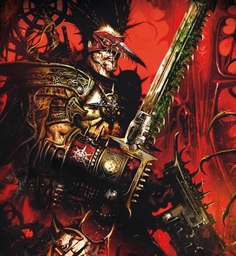