Often seen in red and white robes with the emblem of the prestigious order of scholars known as the Hetaireia Lexis, Inquisitor Sand is a handsome man of Scintilla noble-birth. He speaks clearly and concise and his intense gaze can be uncomfortable for those that it is directed against.

Pre-Inquisition
A product of Scintillan nobility, Gramen Sand was the only child of a small family living in Hive Sibellus. His father was a retired Imperial Guard Chirurgeon with a successful private practice and his mother was a minor noble with extended family ties to the wealthy and influential noble family of House Strophes. Even at an early age Gramen’s parents recognized his exceptional intelligence and talent for absorbing information. They held back no expense to send their child to the most prestigious and advanced learning institutions and Gramen easily excelled at his studies.

Gramen’s scholastic interests were wide and varied, though his main fields of study were in the medicae and technical fields and he was soon using his combined knowledge in these fields to pursue research into bionic and genetic enhancement. Gramen’s academic achievements earned him numerous accolades and membership in various academic and private institutions, including the infamous Colleges Hertaireia Lexis, which he came to serve as an emissary for in exchange for research funding and facilities. These pursuits introduced Gramen to various notable scholars, field experts, as well as several high-level individuals in the Adeptus Mechanicus- including Inditor Karanov and Magos Genator Faust. This is also when he was first approached by members of the Revivicators, a secret faction within the Inquisition, which included some of Gramen’s closest friends.

Believing that Gramen’s knowledge and talents could bring something to their cause, the Revivicators were interested in recruiting Gramen and while Gramen was intrigued, he turned down the offer to become a member, but did keep the existence of the Faction and its members secret and remained in contact working for the faction as a consultant.

The Acolyte
Gramen’s path in the Inquisition started at an academic conference in Hive Tarsus on Scintilla, which Gramen was attending in his capacity as an emissary of Hetaireia Lexis. The Hive level where the conference was being held came under the attack of a deadly viral outbreak, which was the work of a heretical cult that Inquisitor Volk was investigating. An outspoken Inquisitor of the Ordo Hereticus, Inquisitor Volk had made a name for himself as one of the most feared Witchhunters of the Calixis Sector. Gramen was tasked with assisting the Inquisitor and his expert knowledge was essential in both slowing the spread of the virus amongst the population and the subsequent discovery of an anti-virus. At the conslusion of this crisis, Gramen became an Acolyte of Volk and has been serving the Inquisition ever since. Many of Volk’s recent victories over several strong and well-connected heretical cults owe a large part to Gramen. It was Gramen’s expert investigative skills that led Inquisitor Volk to the power-base of these cults and he seems to have a natural knack for analyzing seemingly random pieces of “interesting” information and being able to see the relevant thread that ties them together.

The Interrogator
Gramen’s loyal and competent service earned him the position of one of Volk’s Interrogators and Volk had the utmost trust in Gramen that he often allowed him to conduct investigations into heretical areas of his own interest- using many of Volk’s resources, including several of his Acolyte Cells. Interestingly, while Gramen is not shy about hunting rogue psykers and chaos cults, his main focus of attention appears to forbidden technologies, specifically those that involve Transgenic Blasphemy (the combining of Xenos genetic material or forbidden mechanical implants with the human body). These pursuits have earned him a few raised eyebrows from members of the Ordo Hereticus, but there are also a few Inquisitors, the most notable of which, the famous Inquisitor Srax-Rhame, who have expressed their approval. It was during his time while serving as Volk’s Interrogator that Gramen was again approached by members of the Revivicators and offered membership- this time Gramen accepted and became a member. Only a few knew of his joining and even his mentor and friend, Inquisitor Volk, did not know of Gramen’s choice.

The Inquisitor
Still rising swiftly through the ranks, Gramen’s loyalty, sharp mind, and charming demeanor with fellow members of the Ordos, as well the Calixis nobility earned him a favored reputation and it was not a surprise when Gramen became a full-fledged Inquisitor. As a gift to his new position, Inquisitor Volk gave Gramen the service of two of his own Acolyte Cells, the remains of one of his longest-serving Cells: C13 and one of his most recently created Cells: C2, to add to Gramen’s own network of agents and informants.

Serving the Ordo Hereticus, Gramen and his men successful investigated and stopped several heretical groups, including Logician Agents in the Coscarla District of Hive Sibellus, Scintilla, Serrated Query Agents on Scintilla and the Pilgrims of Hayte in the Arastus District of Hive Sibellus, Scintilla. But these would not prepare Gramen and his men for the conspiracy that they discovered on the Death World of Kenov III where a secret Xenos research facility would bring Gramen and his agents under the scrutiny of the Imperial authorities and the Inquisition itself. Framed by an unknown enemy, Gramen and his agents went on the run evading arrest and assassination attempts to find out who framed them. The Imperial authorities were trouble enough, but Inquisitor Xill of the Ordo Xenos was a persistent threat- seemingly with his own agenda for wanting Gramen and his men terminated.

The Runbus Affair
Further investigations and leads enabled Gramen to piece together the person responsible for his predicament. Tasked by the Revivicators to investigate one of their members, an Inquisitor named Forlorn Gaul, who was also know in criminal circles by the name “Scorpion,” Gramen had uncovered an operation onboard the chartist vessel, the Runbus, by Gaul to sell forbidden Xenos genetic material and technology- while this operation appeared mainly for profit, there was another aspect of it that appeared to point to a secret group known as the “Dominion” whose members appeared to be high-level members of the Imperium, including the Inquisition, that were interested in technology and methods that would enable the unquestionable control and loyalty of humanity.

With renewed vigor, Gramen and his Acolytes combed the Sector for Gaul and were finally able to track him down after several close misses to the war-torn planet of Tranch. There, in a raid on a safe house deep in enemy-controlled territory of the Pale Throng, the Scorpion was terminated when the Guncutter he was on board was destroyed while he was trying to make his escape. While his body was never recovered, based on the genetic material recovered, it is believed that Gaul perished in the explosion. With Gaul terminated and the names of himself and his Acolytes clear, Gramen has recently transferred to the Ordo Xenos where he continues in his service to the Emperor and the Imperium. 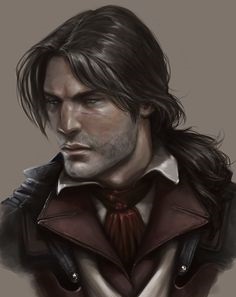