Inquisitor of the Ordo Xenos and expert on Genestealer infestations.

A woman appearing to be in her late forties with bionic legs of expert craftsmanship.

An Inquisitor of the Ordo Xenos and a capable psyker, Inquisitor Jezehell has dedicated her work towards the study and eradication of Genestealer Cults. With so much knowledge base on this particular topic, many officials view Jezehell as one of the top experts in the Calixis Sector on Genestealer Cult activities and she had been responsible for the locating and subsequent termination, either carried out by her hand or by others under her orders, of thirty such cults.

The Acolytes of Inquisitor Sand’s Cell:C2 encountered Inquisitor Jezehell during their investigation on the defunct Orbital Stat098.345, which they were on board attempting to locate the rogue Inquisitor Forlorn Gaul (otherwise known as the “Scorpion”). Prior to Cell:C2’s arrival, Jezehell and her retinue had arrived on the orbital to investigate a suspected Genestealer Cult presence and unfortunately they suffered a number of setbacks during their investigation- the Scorpion crippled Jezehell’s shuttle (because he wrongly believed Jezehell was there to investigate him) and then Jezehell and her retinue underestimated the strength of the Genestealer Cult and suffered heavily losses during an ambush by cult members. Cell:C2 becomes involved in investigating the Cult during their investigation of the Scorpion and happen to locate Jezehell who has been captured by the Cult. Jezehell had been severely tortured and beaten, and as a result has permanently loss the use of her legs. Jezehell explains the situation to Cell:C2 and the Acolytes assist the Inquisitor in an assault on the Cult’s domains, which successfully brings the Cult to an end, but at the cost of 4,000+ souls who were on board the orbital, which was destroyed in the process.

Healed, and fitted with bionics, Inquisitor Jezehell returned to Imperial service and has turned her attention towards putting her skills to use where the Tyranid and Genestealer threat is more prevalent- Jericho Reach where Hive Fleet Dagon is an ever present threat to the Imperium. Fate would not save Jezehell anymore and while investigating a Genestealer infestation on the Argi-world of Avalos, Inquisitor Jezehell would finally meet her end at the hands of a Broodlord. Kill-team Kronus would be dispatched to locate and eventually terminate the Broodlords and his minions, though at heavy cost. 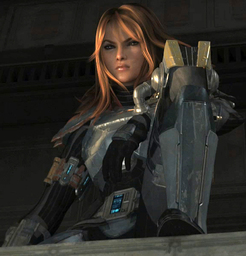