A well established Inquisitor of the Ordo Xenos.

An imposing man clad in a suit of silver power armor that is covered by a black cloak. Xill’s face is of noble bearing with fine bold features. One of his eyes has been replaced by a bionic implant of fine craftsmanship.

Inquisitor Marcus Xill has had several run-ins with Acolyte Cell C2. The first of these encounters took place on the ill-fated Observation Station on the moon of Mono-10. At the conclusion of Cell C2’s investigation of the Xenos parasite that took control of the station’s personnel, it was Inquisitor Xill that arrived to secure the Acolytes and order the destruction of the Station. Classified documents, later discovered, hint at an ongoing conspiracy concerning Mono-10 and the possiblity of Xill having some type of involvement. Whether that involvement was as a conspirator or as an investigator of the conspiracy- the data is inconclusive.

Since the incident on Kenov III, classified documents have come to Inquisitor Sand’s attention concerning Xill and his involvement with a secret organization called the “Dominon Group.” What, or who, the Dominon Group is or are is unknown, as is the capacity of Xill’s involvement. What can be gathered from the avaiable information is that Dominon Group has ties to high levels of the Inqusition and Imperial Government and it appears to be concerned with the stability of the Imperium. To what methods they operate in pursuit of this mission are unknown at this time.

While Xill’s name and agents have come up in a number of Inquisition and Arbite investigations, other than the normal rivalry and criticisms that can be expected from rival Inquisitors and their factions, no serious episodes of heresy or criminal activity have been associated with Xill or his operations. Clearly more investigation is needed into Xill and his operations. 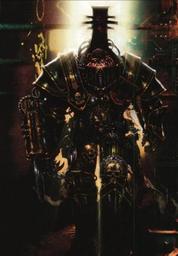