A handsome man with skin the color of ebony and a taste in imposing military dress uniforms that only enhance his air of strength and authority.

Soldevan was originally an Interrogator in the employ of Witch Finder Rykehuss but never believed in his master’s extreme methods, and quickly broke with Rykehuss after attaining the Inquisitorial Seal. Soldevan believes that knowledge, not wanton destruction, is the key to protecting humanity from the threats that it faces.

Soldevan’s beliefs run deeper then he would ever admit. He believes that the warp is an immense source of power and that an Inquisitor is a man of sufficient intelligence and willpower to harness it. Soldevan wants to open up a pathway to the warp and seek out the consciousnesses that dwell there hoping to to bargain with them for the power he needs to combat the enemies of mankind. Soldevan has got quite close to his goal and has several forbidden tomes in his possession that, with the right sacrifices and rituals, will summon forth powerful Daemons for him to negotiate with. He is always seeking more knowledge or artifacts of the warp, either captured during the cabal’s operations or purchased at extraordinary prices from unscrupulous dealers in forbidden relics. Somewhere during this process Soldevan has lost his sanity and replaced it with absolute conviction that the warp holds the secrets of humanity’s survival. He believes that the Tyrant Star represents a vital conduit to secrets of the warp.

Inquisitor Sand and his Acolytes have had several runs in with Inquisitor Soldevan and his servants, all of which so far have been cautiously beneficial for both of them. The first of these encounters occurred during the investigation of the Spacehulk “Twilight” by Sand’s Cell:C2. Soldevan had also sent a team of his own Acolytes, led by one of his most trusted servants Cali-Logi Trempan, to conduct their own investigation. The two teams discovered each other and formed an alliance to continue their investigation and to combat the Dark Eldar menace that was threatening their survival. Half of Trempan’s team was wiped out in the final battle but the most devastating blow of all came when one of Soldevan’s Acolytes, Sgt. Forden, revealed that he was actually a double-agent working for the Black Market smuggling group the Serrated Query. Sgt. Forden escaped with the Dark Eldar after securing a valuable tome.

Months after this encounter, after Sand’s Acolytes were framed as the conspirators responsible for the secret research facility on Kenov III that they were in fact investigating, Inquisitor Soldevan was appointed as the Special Investigator by the Calixis Conclave to investigate Inquisitor Sand and his Acolytes, judge and take appropriate action. Soldevan was not convinced outright of the guilt of Sand’s Acolytes based on the evidence presented in the Arrest Warrants that Inquisitor Xill had issued and decided to conduct his own investigation which starts with Soldevan helping Sand’s Acolytes escape capture by authorities on Scintilla. Sand’s men were offered a chance to work with an Acolyte Cell led by Trempan to continue their investigation (and allow Soldevan to monitor their movements and actions) with additional resources at their disposal.

This alliance was a benefit for both parties- Trempan was able to use Sand’s Acolytes to offset some of his manpower on investigations and Sand’s Acolytes were able to follow an investigation trail that would take them from the Firetide festival at Bonner’s Reach to the forbidden Threnos System where they were able to locate a hidden base for the real enemy behind the conspiracy, a man known as the “Scorpion.” 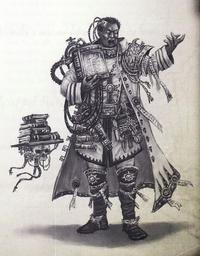