A stern-looking man that appears to be in his seventies though hints of re-juvant treatments reveal that he may actually be much older.

A long-standing and well-respected Inquisitor of the Ordo Hereticus, Inquisitor Tibieus Volk has honorably served the Imperium and the Calixis sector for over seventy years. Volk’s great intellect and formidable psychic abilities has contributed to his success as a hunter of rogue psykers and chaos sorcerers, which appears to be his area of interest- some of his most notable victories include suppression if the “Black Ship Incident,” the cleansing of the psyker uprising on the mining world of Pellucida IX and the banishment of the Tzeentch greater daemon Gol-ganna’tch on the hive world of Archaos.

Inquisitor Volk has continued his battle against the potential psyker menace of the Calixis Sector but as of late he has turned his attention to Komus, the Tyrant Star. Volk is interested in the powers of this mysterious phenomena and its influence on the development of psykers in the Calixis Sector. Volk has not yet officially petitioned to the Tyrantine Cabal about his interest in Komus but his efforts are being watched with interest by their agents.

One of Volk’s most successful students was Gramen Sand, now an Inquisitor himself. While Sand’s investigation interests as an inquisitor are different than Volk the two still maintain a friendly relationship. With Sand’s promotion to Inquisitor, Volk gifted him with one of his Acolyte Cells, Cell: C2, which is still active though many of its original members are no longer actively serving. 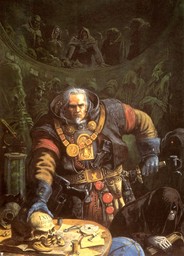