An imposing ganger from Gunmetal City, “Ironman” Sammy as his scum mates and enemies call him is known as a great shot and a better brawler. Most believe that his nickname “Ironman” comes from his seemingly inhuman endurance during a brawl to shrug off blows and continue throwing punches when most people are spent of all energy to continue, but in reality, only known to a few close friends, his nickname comes from the distinctive scar pattern on his back in the shape of a clothing iron, which he received from an angry ex-girlfriend.

Until his arrest and imprisonment by the Adeptus Arbites, “Ironman” Sammy was one of the top Lieutenants of a powerful hive gang based in Gunmetal City called Black Solstice. Involved primarily in illegal gun running and narco-trafficking, Black Solstice was a powerhouse that ran expanded operations through much of the Golgenna Reach sub-sector before a vicious crackdown by Imperial authorities rendered the criminal organization near-extinct struggling to maintain its remaining operations in Gunmetal City. While most of the organization’s leadership was executed, for unknown reasons (due to his Inquisition sealed file), the “Ironman” has not been executed for his crimes but remains imprisoned in a high-security Arbitrator prison facility (rumored to be secretly sponsored by the Adeptus Mechanicius and Inquisition) on Sheol XVII officially designated as Sheol 17.Beta or “the Hold” as it is unofficially called. The reason for staying his execution is unknown but some speculate that it may involve ties to one of Inquisitor Sand’s acolytes- his Interrogator, Quint.

Quint used to work for Sammy prior to his employment with the Inquisition and for the orphan Quint, Sammy the closest thing to a father the child ever had and one of the few people in the gang that Quint developed a friendly relationship with. Now imprisoned on Sheol XVII with an indefinite sentence, Sammy may no longer be on Scintilla calling shots but he is far from being retired from the game and is still quite involved in the criminal underworld. There is little criminally that happens in the Golgenna sub-sector that he does not know something about. 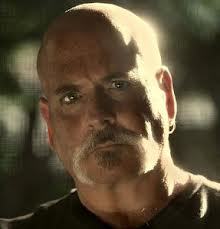