Lazerous has conditioned his mind in order to keep most of his delusions in check. While his disorders may slip out in instances of extreme stress or panic, it is very rare to see him devolve into his younger side.

Lazerous is short and thin. From a distance he may seem like a malnourished youth but upon closer inspection it’s clear that he is fairly well fit, just extremely skinny with a posture that makes him seem smaller than he really is. The majority of his body is etched with large bright blue ruinic symbols that can be seen on the back of his hands and the lower portion of his neck. (The rest being covered with clothing) He has a small Vox Inducer implanted in his throat to replace his damaged vocal chords. Because of this, there is a noticeable mechanical echo to his voice whenever he speaks.

Lazerous was born aboard the infamous Rogue Trader ship “The Narada” along with his Twin sister Valorie. Complication arose when it became apparent both fetuses had been touched by the warp and were sucking the life out of each other. Doctors made the decision to pull them out prematurely but only had enough time to save the female, allowing the male infant to die in the womb. Be it a miracle, fate, or the inherited stubbornness of his mother, the child began breathing after being clinically dead for five minutes. From that day on, his mother would refer to him as “her little Lazerous.”

Two and a half years later, the Narada was bombarded by an alien force. The ship was torn asunder and Lazerous’s father and ship’s navigator, Lucius Vex, perished in the battle. His Sister is thought to have been killed as the ship was destroyed as well. During the battle, Lazerous was caught in a blast that tore through the ships hull and catapulted the child into the dead of space.

He awoke in his mother’s arms aboard the refugee hulk “The Rubble”. This abandoned space station barely stayed afloat surrounded by a sea of space floatsome and ship wreakage. Survivers from these crashes, refugees from the planet below, and all manner of unwanted rif-raf made their way to this hulk in a veiled attempt to cling to life for a little longer.

While attempting to barter for passage off the station, his mother, Moira Geth, was shot and killed leaving the young boy alone in the dark dangerous hell. Using the skills she had taught to him along with his strong natural powers and otherworldly luck in avoiding death, Lazerous survived aboard the Rubble for 14 years.

One day Lazerous was accosted by a newly arrived stranger and he was forced to shoot the man dead using his last remaining bullet. Before he even had time to search the dead man’s belongings, a second stranger appeared dismayed at Lazerous for killing the man before he could have a ‘conversation’ with him. Lazerous responded that the stranger was free to try but he didn’t think the first man would be very talkative.

Laughing, the second stranger revealed himself to be inquisitor Volk. Seeing as how the boy had disrupted his mission by killing his lead, and that killing such a dangerous heretic proved Lazerous had some skill, he offered him the chance to take the pilgrimage to the Golden Throne.

Infatuated by the man before him, and spurred on by the stories of the Emperor his mother had told to him as a child, Lazerous readily accepted. The two departed the Rubble together with the promise that should the boy survive the sanctioning process, Volk might have a place for him in the inquisition.

Twenty-two years later, Lazerous once again stood before Inquisitor Volk. The sanctioning process had caused some fractures, but the boy had managed to survive it. True to his word, Volk has promised to introduce the psyker to Inquisitor Sand believing the boy may be of some use in one of his cells.

Personalities:
Due to the sanctioning process (and likely originating from the circumstances of his childhood), Lazerous’ mind was fractured into two alternating personalities.

The dominant personality is that of his 16 year old self. He has a child like innocence that serves to protect his mind from the harmful effects of the warp, however it has caused him to become a wild schizophrenic and suffer from strong delusions of grandeur. He believes he is followed by two imaginary friends, Sebastian and Gary, and spends a lot of his time in discussion with them. Like a child, he is prone to random shifts in mood and inexperienced bouts of recklessness, but he is more or less lighthearted, kind, and approaches the world with optomism and joy.

The submissive personality only takes control whenever Lazerous finds himself under threat (entering combat for instance). This personality represents the other 23 years of his life, making it more mature and less optimistic/hopeful about the world. He is ruthless both in combat and in attitude and will not hesitate to kill anything and anyone he feels poses a threat to him or his alter ego. If asked about the ‘imaginary friends’, this side of Lazerous would likely reply that he has ‘grown out of such childish games’. Unlike his younger counterpart, he does not relish in his delusions but attempts to ignore them choosing instead to focus on whatever problem caused him to appear and resolve it as quickly as possible.

Regardless of which personality is in control, Lazerous is a gifted fortune teller being skilled in the arts of divination. Palm readings, fortune telling, and channeling ‘past lives’ are among his specialties. He favors a pistol to melee combat or even his Psyker abilities and is often quick to draw on anyone who seems like a possible threat. (A trait learned fast aboard the Rubble) He also speaks in a Celtic brogue, an inherited trait from his mother. He’s also rather steadfast about keeping a diary on whatever scraps of paper he can find. With so many voices in his head, he likes to know he can put a few private words down. Although, once written, he doesn’t tend to keep a good eye on the pages.

Due to the events of Red Cell on the forbidden planet of Mara certain events in Lazerous’ past have changed. While most of these events serve little to impact the overall picture, the sheer number of “opposite coin flips and decisions” so to speak has left one major change to the psyker. Instead of his younger and more brash side running the show, his personalities have swapped leaving his more calm and calculating personality in charge. That’s not to say his usual crazy self won’t make an appearance or two, but the ‘new Lazerous’ spends quite a lot of time trying to keep that side of himself under control, going so far as to draw arcane runes on his hands and face to keep the ‘other him’ in check.

Family Legacy – After his mother was slain, Lazerous managed to recover both her cross medallion and her unique hand cannon “Valkyrie”. Complications early on allowed a stranger to steal the gun and escape the station with it. It’s a solid black pistol modified to be used one handed without penalty and allows for an extended clip(6). This gun has incredible sentimental value to Lazerous and as such, it is his goal to locate and recover it. In addition, he is always on the lookout for any information about his mother’s past including the name and whereabouts of her brother.

Sibling Rivalry – Lazerous’ two personalities share all thoughts, experiences, emotions, and ideas save one. The dominant personality believes his sister to have died in the destruction of the Narada, however the submissive personality knows better. The connection between the twins allows Lazerous to know that somewhere his sister lives as a rogue Psyker, unsanctioned and disconnected from the Emperor’s light. The older personality knows that should his young counterpart ever realize this, it would destroy his innocence and open his mind to the corruption of the warp. As such, it is the submisive personality’s goal to find his sister Valorie. If he cannot bring her safely into the Emporer’s will, he will finish the job fate started all those years ago. In addition, he is always on the lookout for any information about his father’s past and ultimately his legacy as a psyker.

Family:
Father – Lucius Vex – Navigator aboard the Rogue Trader ship ‘the Narada’. Considered to be a master of both Biomancy and Telekinetics. Extremely powerful Pskyer. Killed in the destruction of the Narada.

Mother – Moira Geth – Scum Mercenary with a long history of exploits. She was a skilled gunman and master of assult tactics and covert-ops. has been known to have worked aboard multiple renegade starships and possibly part of a few assassination attempts. Killed aboard the space hulk “The Rubble”.

Uncle – ??? – Moira Geth’s estranged brother. Known to have completed some mercenary work with her until they had a falling out prior to her serving aboard the Narada. Current whereabouts unknown, Current alignment/affiliation Unknown.

Cousin – ??? – Moira Geth’s Nephew, born on some unknown imperial world and trained by his father. Current whereabouts unknown, while his exact role is unknown, it is clear that he is in some way working for the inquisition in some capacity. 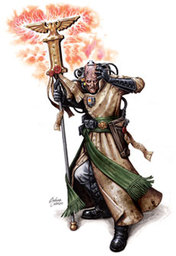