A man of indeterminate age, he is rarely seen without his golden mask and suit of gilded armor.

Anton Zerbe is the commissioned leader of the Tyrantine Cabal, a position he was granted by Lord Inquisitor Caidin himself. This has created some confusion within the ranks as Caidin serves as the ranking Inquisitorial authority in the sector but Zerbe holds significant power due to his rank and position. Zerbe does not take his duties lightly, as he believes the black doctrine of the Tyrant Star to be very real indeed. He rarely leaves the Bastion Serpentis, and chairs the frequent meetings of the cabal’s Inquisitors. Zerbe once roamed the Imperium seeking out corruption and incompetence amongst the Adepta but he is now dedicated to his role and seems perfectly at home on the throne of the Bastion’s audience chamber. He is not an easily approachable man and always remains distant from those around him.

Zerbe is even-handed to a fault, refusing in all cases to support one Inquisitor over another, no matter how grave an accusation might have been brought. His principal motivation is preventing strife within the Tyrantine Cabal, so that the group can do its holy work. He believes that if any one Inquisitorial faction within the cabal is to prevail, the sector—The Imperium itself—would be doomed. If the Recongregators got what they wanted, the cabal would devolve into anarchy. If the Xanthites prevailed, Chaos would corrupt the work. Even the Amalathians, if they succeeded in their aims, would drag the cabal into a miserable malaise. Zerbe’s objective is to prevent any one of these factions overcoming the other in the Calixis Sector, so that the Hereticus Tenebrae might be averted. Nothing else matters. He will even go as far as to recruit acolytes of his own to foil one of his Inquisitors’ plans. In addition to his political skill, Zerbe is a powerful psyker, although this fact is not generally known within the cabal. Zerbe keeps his psychic talents reserved should he be forced to vanquish a particularly dangerous foe personally. 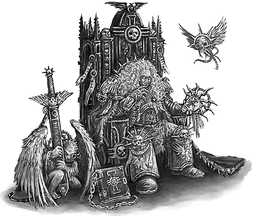