Traits: (300)
Charmed: Whenever spending a Fate Point, roll 1d10 and gain the point back on a “9” [Home World]
Ill-omened: -5 penalty on Fellowship Tests interacting with non-Void-born humans [Home World]
Void Accustomed: Immune to space travel sickness and zero and low-gravity is not Difficult Terrain
Fringe Survivor (Pit Fighter) [200xp]
Crusade (Warrior) [250xp]
Hand of War [Starting]
The Face of the Enemy: You will never willingly have dealings with Dark Eldar. If you are forced to you are at -10 on all Fellowship Tests concerning those dealings and will at the slightest provocation resort to violence against them (the GM can allow a WIllpower test with appropriate modifiers to avoid this)
Endurance [Starting]

Luck was born on one of the ships that travel the void, one of many ships that made up a battlefleet of the imperium. Her family was a part of an ancient line of assassins, and brought her up to follow in their footsteps. She was initiated into the order at a young age, learning the contacts among many of the ships.

She was sent to a planet for training under a planets gravity and moving through brush rather than a ships corridors. It was while she was on the planet that a tragedy struck the fleet. A lightning raid launched by the Dark Eldar forced the Battlefleet to leave the vicinity, and the ship that had been Luck’s home was destroyed.

Luck eventually managed to make her way to a local town, where she managed to beg and steal to survive. Something inside of her had broken, and she rarely spoke in the months following. After a few months of this she came into contact with an Inquisition Acolyte, Interrogator Quint. Quint formed a bond with her rather quickly as he had her help him with the infiltration of a local crime syndicate that had come into contact with proscribed artfifacts.

After Quint’s mission had ended, he took Luck with him, recognizing her potential, and feeling empathetic for a fellow orphan. The year that followed Luck’s training continued and she began to speak again, although others that got to know her said it was creepy the way her eyes always seemed cold and distant. In fact, the only time she showed any interest or joy in life was when she was engaged in battle, or talking excitedly about enemies that she had disembowled, shot, or maimed.

Now she continues her tutelage under Quint, helping him and fellow acolytes hunt down those deemed too dangerous to remain alive in the Imperium, searching for anyone or anything that can increase her abilities. 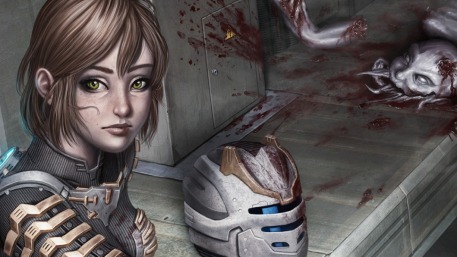