Known Associates and Organizations: Adeptus Mechanicus (Biologis Specialization with ties to the Organist faction), Inquisition (associate of several inquisitors, including Inquisitor Sand of the Ordo Xenos currently operating in the Calixis Sector), Revivificators (member and associate of several faction members, including Magos Genator Faust), Hippocrasian Agglomeration, and, recently, the heretical tech-cult, the Logicians.

Confirmed Heresies: While many in the Revivificator faction participate in questionable and, according to some, heretical activities in the pursuit of their duties, Magos Caerivus has not participated in any activity of concern with the exception of disagreements with more orthodox colleagues of the Adeptus Mechanicus not approving of some of Caerivus’ research projects and theories. Two years ago, information has come to light that Caerivus had been working with the Logicians and sending their agents correspondence on classified Revivificator research projects and activities.

Background: A valued member of the Revivificator faction, and close associate of Magos Genator Faust, Caerivus has been in the service of the Adeptus Mechanicus for sixty-eight Standard Terran years (twenty-three of which were in the service of the Revivificator faction). Caerivus is mostly known for his expertise in the field of genetics and held a position on several prominent research panels concerning Xenos and human biology. For the past forty-six years, he has been studying the work of renown Adeptus Biologis (now deceased) Magos Genetus Halix Redole. Redole was a prominent member of the Adeptus Mechanicus and a member of the Organist faction (a faction of the Adeptus Mechanicus dedicated to the study of using biology and genetics instead of mechanical devices to enhance humanity and its work).

Known Motivations and Goals: Magos Caerivus appears, like all Magos of his order, to be extremely dedicated to his work and predictions are that he intends to further develop and expand the knowledge base of the genetics field in the Calixis Sector though there have been some rumors that his research is dangerously close to the proscribed realm of Transgenic Blasphemy. Caerivus’ motivaations for working with the Logicians is unknown but speculation supports that the Magos might be seeking less restrictive methods and resources to support his research.

Encounter Protocol: Capture if at all possible and secure for interrogation and trial. Termination is appropriate should capture be unobtainable.

Magos Caerivus was terminated by Inquisitor Sand during the Inquisitor’s investigation into a suspected Dark Age Archeotech cache site on the hive world of Solace that was discovered instead to be the resting of an unknown Xenos race that has since been identified as a species called the Necrontyr. 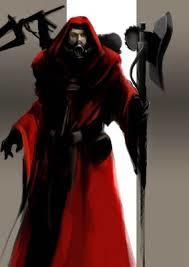