An ancient pile of rust in the dirty red robes of a tech-priest of Mars fitted with an assortment of cybernetic and bionic implants that appear to be barely functional.

Captured a few centuries ago, Magos-Errant Domos Agnelain was accompanying an Explorator mission into the Koronus Expanse in search of the Gaelan Sphere, when the vessel was attacked by a large group of Dark Eldar whilst performing maintenance rites after a somewhat tumultuous journey through the Warp and taken after a short battle. Over the following years, Agnelain saw his brethren mutilated and flensed down to little more than augmetic-enhanced skeletons driver by shattered minds, yet Agnelain alone was spared the worst of the torturers’ cruel attentions. He did not find out why until decades later- the Dark Eldar had discovered that he the leader amongst the surviving tech-priests, if only by the dint of his rank, and had spent years siphoning and pillaging lore from the minds of his subordinates before they reached the leader.

Centuries passed with a dwindling number of captives for company and when no comrades remained Agnelain’s mind finally turned on itself focusing on the knowledge he had attained rather than face the horrors of his surroundings, and frequently talks to his long dead mentor, Magos Pridus Thurizan (who he believes is actually nearby also in captivity). Eventually his captors came for him as well. It took the Dark Eldar a matter of years to unlock the secrets of his mind and begin sifting through them to find anything of use. 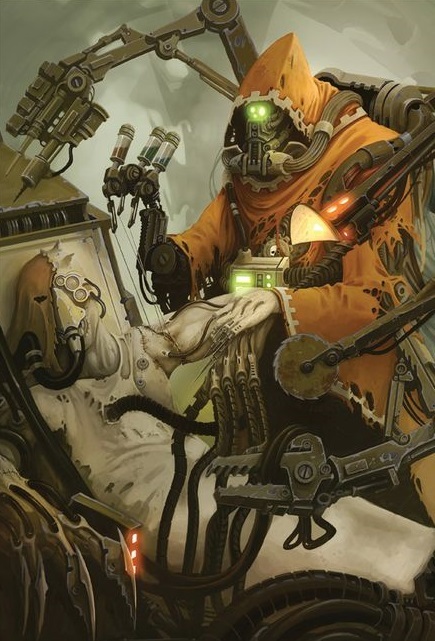