A senior-ranking Tech-Priest of the Adeptus Mechanicus and secretly a ranking member of the Revivificators Faction.

A heavily augmented (with both cybernetic and genetic enhancements) Tech-Priest in the voluminous red robes of a senior-ranking member of the Adeptus Mechanicus.

A powerful and influential leader in the Adeptus Mechanicus in the Calixis Sector, Magos Faust is versed in knowledge of Technology new and old though his main speciality is in the research of genetics. As a gifted Tech-Priest of the Mechanicus’ Biologis field, there has been guarded speculation that he has dabbled in the splicing of Xenos bio-matter with the human genome in order to enhance humans but his acceptable research and development of bio-enhancements, such as in the areas of re-juvant treatments and selective human gene manipulation, and the success in these areas, has overshadowed the need to bring the Magos’ under investigation (though he still has his opponents who keep their accusations to themselves- for now).

Magos Faust’s non-orthodox field of study in the Mechanicus has influenced him to find like minded Tech-Priests for support and to seek refuge from the scrutiny of his work. These were the main reasons that he joined the sect of the Hippocrasian Agglomeration,which is filled with many individuals that share Faust’s interests (even some that are willing to push the science even beyond Faust’s extreme comfort level). He spends most the majority of his time with the Hippocrasian Agglomeration fleet in orbit above the dead world of Morwen VI.

Consequently, Magos Faust’s expertise in his field lead him to the radical faction known as the Revivificators (which concidently has its Calixis Sector base of operations within the Hippocrasian Agglomeration’s fleet). Faust’s knowledge base and reputation allowed him to rise in the ranks and currenty he is secretly a high-ranking member in the Faction. He would use his connections with the Adeptus Mechanicus and Inquisition, as well as other intellectual organizations in the sector, to recruit other promising individuals to the Faction’s cause- Inquisitor Sand was one of these individuals. Magos Faust oftens pays attention to Tech-Priests and Scholars who display an interest in more unorthodox technologies and research, which is how he learned of Hadrian and became his mentor. 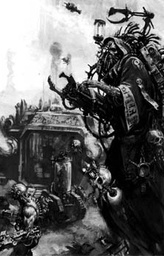