Stotic-looking and strong in faith, Metalus is a faithful and dedicated servant of the Emperor and Imperium.

A bald-headed man in his thirties, Metalus is often seen wearing the vestments of the Ecclesiarchy and carrying a large mono-hammer.

Inducted to serve Inquisitor Sand following Acolyte Strang’s death at the hands of Logician Agents on the planet of Scintilla, Father Metalus was inititally thought to be a good fit as a member of Acolyte Cell: C2. He was battle-hardened from his time serving with the Imperial Guard and his faith was strong. Despite promising expectations, Father Metalus did not share the appreciation for the behind the scenes intrigue of the Inquisition and prefered to fight his enemies face-to-face. A staunch Puritan, the radical elements that sometimes expose themselves in the course of Inquisition duties and investigations put Metalus at odds with some of his fellow Acolytes and superiors.

Following the false accusation of Cell C2 on during the investigation of the heretical research facility on Kenov III Metalus chose to turn himself in to the authority of the Ecclesiarchy and accepted a position serving with a Imperial Guard Penal Regiment conducting operations near the Eye of Terror as pennace and sentence for the false warrant. Rather than accepting the situation as a negative situation, Metalus instead looked at it as an opperunity to go back to doing what he believed his duty to the Emperor was- as a motivator for the faithless in the Emperor’s flock to inspire them to crush the enemies of Mankind.

Metalus distinguished himself fighting with valor against the enemies of the Imperium and was discharged from the Penal Legion- his sentence served) and allowed to return to service in the Ecclesiarchy on the war-torn world of Iocanthos serving the ambitious Abbot Orland Skae who was seeking to created the first Cathedral dedicated to the Emperor on this forsaken planet. This post would be Metalus’ last as the Abbot was later found to have been corrupted by the powers of Chaos and his plans to build a Cathedral were hiding his true objective, which was the calling forth of an ancient daemon called Tsyiak. Metalus would once again join forces of the Inquisition in banishing this abomination back to the warp. Though successful in stopping the daemon, this battle cost Metalus his life. 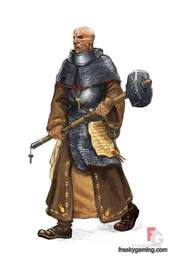