Like all Kroot, Hakh cuts an imposing figure, but her captivity in the Dark Eldar arenas have left their mark- her green flesh is mottled by discoloration, her beak has a long chip cut from it, and she suffers from periodic twitches when she is not in battle.

An able warrior and a vicious foe, Nashrik Hakh was a veteran of many battles in the Jericho Reach before she was captured alongside the remnants of a cadre of Tau by the Dark Eldar. Nashrik Hakh has survived where many of her kin have not. The strength, agility, sensory acuity and most of all the genetic pliancy of the Kroot saw her kindred divided between the laboratories of the Haemonculi and the fighting pits of the wych cults. Hakh was part of the latter group and found herself and her ever-dwindling kin driven like beasts into the arena time and time again without respite.

Nashrik has survived physically but her psychological state is deeply damaged. She suffers from the lingering effects of consuming flesh ridden with vile cocktails of Dark Eldar chemical enhancements, Her brain, and those of her few remaining followers, is permanently damaged, mostly in the areas that dictate the sense of one’s self. Hakh constantly struggles to maintain a sense of who she is while the seared parts of her brain drive her ferocity to new levels.

Fortune would find Nashrik and the remnants of her kindred when they agreed to join forces with a group of Inquisition acolytes that had been taken prisoners. Along with the rest of a coalition made of other prisoners, and some other help, a slave uprising caused millions of deaths (mostly slaves) in the Dark Eldar city, the Nexus of Shadows, but many slaves were fortunate enough to escape, including Hakh, a few of her kin and the acolytes. 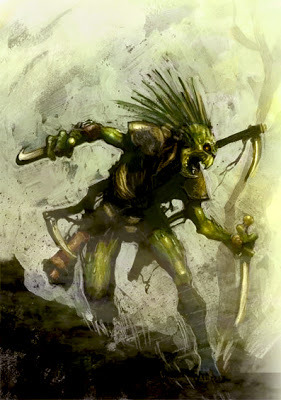