Archon of the Kabal of the Shadowed Thorns

Salaine Morn intentionally projects a presence that is both evasive and unmistakable; her dread majesty is hard to put into words as it is to ignore. Appearing at once menacing and tempting. the Archon catches many of her foes off-guard, uncertain of the obfuscated nature of this ancient being, Morn is several thousand years old, though only she knows for certain how long she has been alive, and has seen and done much that would long haunt the nightmares of lesser beings. Like all Archons, she is possessed of a deadly martial prowess, but her true weapon is a mind finely-honed by the lethal intrigues of Commorragh’s high society.

Salaine Morn is the current Archon of the Kabal of the Shadowed Thorns, an outcast Dark Eldar Kabal. After being exiled from Commorragh, the Archon spent years wandering the Webway with her fleet, raiding worlds and looking for a place to claim as her own. Eventually her Kabal stumbled upon the Gaelan Sphere, an ancient relic of a long-forgotten age of technology. The size of a small moon, covered with towers and antennae, the sphere was crafted around a solid core, the remnants of some mineral rich asteroid that its automated systems are slowly eroding away as it adds more and more levels to the sphere. Unfortunately for Salaine, the sphere’s defences and legions of Servitor guardians were too numerous and powerful for her Kabal alone to overcome. Thus, Salaine forged an alliance with Zaergarn Kul and his Kabal of the Splintered Talon, and together they purged the city of its ancient human defences, destroying that which they could not control and sealing away the areas that they could not inhabit.

Eventually, the Dark Eldar built the Nexus of Shadows, a dark and dangerous artificial world that is controlled and partially developed, and populated with some of the worst xenos to ever crawl out of the Koronus Expanse. The city has festered and grown into a common port for the Dark Eldar and those who trade with them. As a base, it provides an excellent and well-hidden locale to raid the nearby Koronus Expanse, Calixis Sector, and even the Screaming Vortex, while its place within the Webway gives it access to hundreds more worlds scattered across the Segmentum Obscurus and beyond.

Unfortunately for Salaine, it was not an outside force or an alien that was to oust her from power. In the end Zaergarn Kul usurped her, and exiled her once more into the Webway before she could do the same to him. For many of the inhabitants of the Nexus this change in power meant little, especially for the slaves, to whom one Dark Eldar Archon is much the same as another. She finds it utterly distasteful that she and all those she commands are exiles from the Dark City and now even the Nexus of Shadows. At her grudging command, the warriors of her Kabal have turned to mercenary work, selling their efforts to lesser beings as part of a plan to regain the power she once possessed. 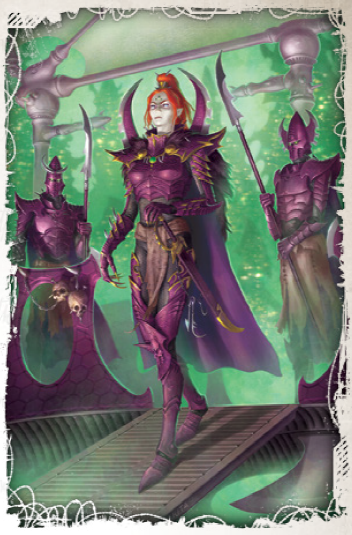