A well-connected nobleman, Solomon serves Inquisitor Sand as an informant and fixer

A handsome man of noble bearing and quite the charmer, Solomon Gann is a member of the wealthy and influential Gann family, which heralds from Hive Tarsus on the planet of Scintilla. When not wearing functional clothing for the task at hand, he prefers the elaborate and expensive wardrobe often preferred by the Scintilla nobility.

Solomon Gann grew up as a privileged member of one of the various noble families in Hive Tarsus on the planet of Scintilla. Taking his lavish lifestyle for granted, Solomon became involved in all the sort of illicit and depraved activities that are usually associated with the corrupt nobility- drugs, sex, and acts of cruelty. His behavior won him no fans in the Ecclesiarchy and his family reputation was hurt by Solomon’s activities which historically had strong and devoted ties to many close personal friends that were senior clergy members.

Empowered by an untouchable attitude, and never having suffered anything but minor infractions for his escapades, Solomon embarked on a daring criminal enterprise of black marketeering with specialization in Xenos and ancient artifacts. His small operation did not last long before it drew the attention of a group of experienced Cold Trade smugglers who did not appreciate the competition. It did not take long before Solomon’s operation was in shambles- its infrastructure dismantled and Solomon’s associates dead.

Solomon himself was running from the smugglers (who were interested in tying up lose ends) and his end was near. If not for the intervention of Inquisitor Sand, who actually had Solomon and his operation under surveillance, Solomon would be dead like his business partners. Inquisitor Sand decided that utilizing Solomon’s talents might better serve in the Emperor’s work then his death and spared his life in exchange for his service. Thankful for being alive, and realizing that he was still naive in the ways of the world, Solomon accepted Sand’s offer and has come to enjoy his service. 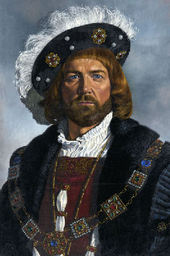