A reserved man with a belief in the Emperor equaled only by his belief in himself.

Description
A slight man of nondescript height, his face betrays little in way of his thoughts and emotions. Formally dressed in midnight-blue robes, which bring a sharp contrast to his almost translucent skin. Four long scars stand prominent on the right side of his face and keloid scars mark his body in numerous places. The only visible weapon on him is a sheathed sword dangling from his right hip.

On the fifth day of the cleansing of the heretical freighter Joy of Man a small child was found by a squad of Storm Troopers. On the seventh day of the cleansing of the freighter, a small child amidst the remains of several bodies was found by a squad belonging to the Scholastica Psykana. Reports of warp fluctuations aboard the vessel had caught the attention of the higher-ups at the dockyard where the freighter was berthed and several squads had been prepped and sent in to root out any unsanctioned psyker activity. It was not surprising that a warp-sensitive would be found on the ship. Indeed, on vessels such as that a dozen or more warp-sensitives were likely to be found. What was surprising about the child was the utter lack of corruption detected in a warp-sensitive so powerful. Within a day of discovery, the child was packed onto one of the Black Ships of the Inquisition.

While at the Scholastica Psykana, Tiberius rarely thought of his family. They had been dead for over six years now, killed in one of the many small battles constantly going on in that darkhold he had called home for so long. He rarely even thought of the ship that he came from, a place populated by mutants, cultists, and other dregs of humanity. He didn’t think of these things simply because they were no longer a factor. Tiberius lived in the present and for the future. Where others in the School cracked under the pressure exerted upon them, Tiberius thrived knowing that every examination and every test made him stronger. Every time he excelled he knew that his worth went up in the eyes of the superiors. Being raised where he was, he didn’t know a whole lot about the galaxy-spanning civilization that he was being trained to one day defend. All he knew was that he had a power. A power that must be trained and nurtured so that it would become more powerful. So that he would become more powerful.

Tiberius knew what was going on even if his so-called peers didn’t. He knew that they had been selected above the rest, chosen as the cream of the crop above the rest. What they had been chosen for exactly Tiberius didn’t know, but looking around at the others who had been held back from graduation and sensing the power within them all, he knew that it must be for something important. When he heard the news that they were to be sent to Scintilla, to work for the Inquisition, he smiled. This was the chance that he had been working towards.

Having been in the employ of Inquisitor Sand for over nine years, Tiberius was not terribly surprised to be called into his office alone. While Tiberius did not believe that Inquisitor Sand liked him all that much, he knew that the Inquisitor at least valued him and trusted him to a certain degree. Tiberius expected that he would soon be transferred to another cell, seeing as his last one did not quite make it through the last mission. Still, the menace had been eliminated, so Tiberius counted the mission as a success anyway; teammates were useful tools, not friends. Maybe Inquisitor Sand was calling him into his office to congratulate him.

When Tiberius heard the news that he was to be sent to the north for further training he was surprised. He had heard of the Templar Calix of course, but nothing too detailed. He knew that their headquarters was located on Scintilla and that they were quite rigorous with their training and that to be even considered by them as a possible initiate was a high honor. This was a chance to further himself in areas that he had never even thought of before. Anyways, it’s not like the Inquisitor was giving him a choice in the matter.

Nine months of training that went put the word rigorous to shame. Nine months of exhaustive mental and physical training day in and day out. Nine months solely spent being trained and tempered into a pure weapon. And it was barely enough. Tiberius looked over the room where the bodies of the cultists lay. He lifted up what was left of his sword, a blackened hilt and barely an inch of jagged metal was all that was left of his prized monosword that he’d carried for over eight years. He bent over and picked up the object he had come for, carefully covering it with the bag inscribed with glyphs of warding and protection and walked out of the room. The psychic stench of warp beasts hung heavy in the air, slowly fading away, as he walked out of the old temple on Sepheris Secundus. Tiberius was exhausted mentally and severely wounded physically as he climbed into the small shuttle that had brought him here. He had succeeded. The Master Templar would be pleased. The cult had been exterminated, the daemons had been banished, the object had been recovered and would be restored to its proper place in the vaults of the temple-monastery. How the cultists had managed to steal it in the first place was still unclear to him, he was simply glad that out of the four initiates that had been sent to this place, he had come out alive. The fact that he was the only one who had come out alive made him smile as it seemed a fitting ending to his training on Scintilla.

The Master Templar took the bag from Tiberius’ hands, the burnished silver mask emotionless as always. Setting the bag in a hex-warded box, the Master Templar turned and opened a chest. Drawing out a robe of midnight-blue, a cowled mantle of black samite, and a silver mask, similar to the one he was wearing, he proffered them to Tiberius who took them, as emotionless as the Master Templar. Maintaining an emotionless face was easy for Tiberius, maintaining an emotionless mind, as was expected, was harder as he could feel his excitement pounding on his mental barriers. Finally the Master spoke, “I read in your report that you lost your sword in the fight with the daemon. That is of no matter. You are now no longer an initiate and to use such a sword would be an affront to who you have become. For now you are a Templar and a Templar must carry a weapon matching his abilities.” With that, the Master drew a sword from his right hip and held it out to Tiberius. The sword was of a silvery material with intricately etched runes covering the blade in its entirety. “I received a message from your Inquisitor this morning. He expects you at the Tricorn Palace by nightfall.” 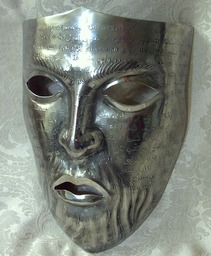