A tall fair-skinned man with shockingly violet eyes and brown hair that falls a bit below the ear, Valen is rarely seen without his trademark black slouch hat, dark cloak, and leather boots. With a rifle barrel poking out the top of his cloak, a sword on his right hip and an autogun on his left, he possesses an aura of quiet menace. An unknown number of other small weapons rest concealed on his person.

Valen was raised by a religiously devout family on the planet of Sinophia. His father, a mid-ranking firebrand cleric, continually spoke out against the corruption that infected the planet and the capital where he lived. Unfortunately, this is not the healthiest position to take on the planet of Sinophia where corruption runs rampant through both the ruling noble classes and the underworld. When Valen was 12 years old, his father and mother were both killed as a blatant sign to all others who might try to push for reform in the city.

Valen was spirited away by friends of his father the night of the attack. Unbeknownst to Valen, his father was a member of a small reformatory group that was attempting to cleanse the capital from the inside using extreme measures. Here he was trained for six years in the physical arts, picking up a little bit of information on the various corrupting influences on the planet. He was being shaped into a servant of this faction; a servant bent on revenge against those who would speak out against the God-Emperor and the righteous way to live.

Valen’s first kill was a minor nobleman who had connections with a local cult to Slaneesh. His second kill was a mid-ranking drug lord. Many more followed in the ensuing months and years as Valen was at first given targets by his superiors and then, once he had first-hand experience, targets that he himself chose. All of these kills were people who worked in the underbelly of the city or in the decadent estates of the nobility. He was driven to do his part in the eradication of the undesirables and over the years the means to achieve his results became less important than the results themselves.

Now, Valen has been chosen by the Inquisitor Gramen Sand due to his familiarity of the politics and streets of Sinophia and his ability to silence his opponents whoever they might be. Valen is bound and determined to do whatever is necessary in assisting his Inquisitor as it might be his best chance of furthering the cause of cleansing his beloved planet.

During their investigation of the Ramsus Mansion on the planet of Valen’s home world of Sinophia, the party acquired a mysterious dagger among the objects that the family used to conduct their ceremonies to the dark powers. Valen took a liking to this dagger, and unknown to the party at the time, the dagger contained a bound daemon of Khorne called the “Hunter” the began to exert its influence over Valen. The promise of power and increased fighting prowess proved to too appealing for Valen to pass up and he began wielding the dagger as him primary weapon. With the dagger in hand, Valen went into a near-unstoppable frenzied state in which he was a combat monster of great strength. The downside of this altered state was that Valen had a hard time to controlling his state and once the enemy were dispatched he would quickly turn on his fellow teammates until he was able to regain control.

Eventually Valen’s party realized that Valen was indeed daemon possessed by his attachment to the dagger and during a crucial battle against the corrupted Arbitrators on Sinophia, Valen again turn on his teammates when the enemy was defeated. It was only after Rasar shot off the arm that Valen was holding the dagger in was Valen able to regain control of himself. Alas it was too late. The damage that Valen had sustained in the battle was too much for his body without the power of the dagger to sustain him and he perished. 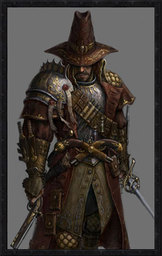