Brand Mac Lir halted originally from the Storm Wardens Chapter where he won fame in the Cleansing of Vigil. His experiences fighting the foul Slaugth kindled a desire in him to join the Deathwatch. His keen fervor and veteran tactical skills saw quick promotion for Brand- by his third deployment, he lead a Kill-team, and was elected Watch Captain on his ninth Vigil.

Brand can be a cautious leader at times because he’s always wary of the tricks and traps of the enemy, but once battle is joined he is as ferocious and direct as any Space Marine. Brand’s Sacris Claymore Morwenna has reaped a tremendous toll of alien blood and ichor in deadly hand-to-hand combat. 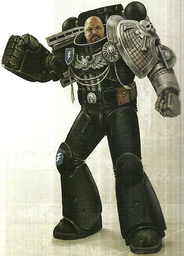