Plasma Drives: Modified Jovian Pattern Class 2 Drive (a wonder to the Adeptus Mechanicus, the STC standard drive on this ship is much older than anything ever seen before and many in the Mechanicus believe that it is unknown archaeotech; the strange and exotic nature of the materials used in the drive’s containment domes allows for a hotter plasma ‘burn’ while taking up less space).
Warp Engines: Strelov 1 Warp Engine
Void Shields: Single Void Shield Array
Geller Fields: Standard Geller Field
Bridge: Combat Bridge (equipped with a Damage Control Station which grants a +10 to all Tech-Use tests to repair the ship as long as the bridge remains undamaged).
Life Sustainers: Vitae-pattern Life Sustainer
Crew Quarters: Voidsmen Quarters
Auger Arrays: Auto-stabilized Logis-targeter (near-heretical cogitator circuitry from the Dark Age of Technology, it increases the accuracy of the ships weapons and detection ability).

Augmented Retro-thrusters
Reinforced Prow: +1d5 additional damage when ramming
Reinforced Interior Bulkheads
Crew Reclamation Facility: The Mechanicus has no qualms about converting the grievously wounded into servitors, though the rest of the crew might have a different opinion (reduces all losses of Crew Population by 3, to a minimum of 1. Increases all losses to Morale by 1).
Murder Servitors: The ship possess a stock of skull-faced killing machines that are sealed in stasis till needed (gain a +20 bonus opposed Command test when used to conduct a Hit and Run Action; when determining the Critical Hit inflicted by the Hit and Run Action, the character conducting the raid may select any result between 1 and 6 rather than rolling).
Observation Dome: When working towards an Exploration objective, earn an additional 50 Achievement Points towards completing that Objective; also increases Morale).
Temple-Shrine to the God-Emperor: When working toward a Creed Objective, earn an additional 100 Achievement Points towards completing that Objective; increases Morale).
Librarium Vault: An ancient collection of writings and manuscripts (all Investigation Skill tests made aboard the ship gain +10 bonus).
Laboratorium: Grants a +20 bonus to all tests used to identify, analyze, repair artifacts of ancient or Xenos origins; or to any tests to craft single items.

Machine Spirit Oddity: Wrathful: The ship’s spirit constantly smolders with anger and explodes into a berserker fury in battle.
Finances in Arrears: This ship was made possible by the contributions and influence of several powerful financial, political and authority figures (most notably, Inquisitor Sand of the Ordo Xenos) and a certain amount of return is expected from their investment (whenever the crew attempts to complete an Endeavour’s Objective, they must accumulate an additional 50 Achievement Points to accomplish the Objective).
Planet-bound for Millennia: While fighting the Adranti during the Angevin Crusade, this warship crash landed on the planet of Volonx relatively intact but forgotten until orders backed by several Inquisitors started the process to restore the ship to once again serve the Emperor (superstition claims a planet-bound ship maintains a particular affinity for planetary bodies; gains +10 to Maneuverability while within 5 VUs of a planet).

A former ship of the line in the Imperial Navy, the Arcadia has a long and glorious history of service to the Imperium. After fighting courageously across several sectors across the galaxy in humanity’s crusade of unification and to expand its realm, the Arcadia would finally meet its end in the Calyx Sector during the Angevin Crusade. During a desperate space battle in the Adrantis Subsector with the Adranti Xenos race, the Arcadia suffered crippling damage and plummeted to the surface of the nearby world of Volonx. Fortunately for the crew, the ship again proved its strength and was able to survive the crash largely intact and many of its crew survived, though the ship was no longer space-worthy and its crew was quickly extracted and re-assigned to other ships so that the crusade could continue. The Arcadia remained on planet for hundreds of years largely forgotten.

More than two thousand years later, Inquisitor Sand of the Ordo Xenos was able to successfully petioned his superiors and the High Lords of Terra to reestablish a defunct Writ of Trade granting Du’Landra Melua status as a Rogue Trader. The success of such an action was a rare and nearly unheard of occurrence, especially when considering the request coming from a relatively unknown Inquisitor with limited service when compared to his peers in the Imperium at large. Many theories have been presented as to why Inquisitor Sand’s petition was successful. Some of the most popular ones point to Sand’s petition being supported by several other powerful and influential Inquisitors, most notable Lord Inquisitor Caidin, Lord Inquisitor Zerbe, Inquisitor Volk and Inquisitor Marr. Others speak of Du’landra’s ancestry to the infamous Rogue Trader Eramus Haarlock and his recent return after disappearing hundreds of years ago- some fear he plans to return to destroy the Imperium and perhaps one of his ancestors can stop him, while others believe that Haarlock will continue to seek out family with claims to his power and perhaps sending Du’landra into the depths of the Kronus Expanse will lead Haarlock far from the realms of man to pursue his kin. Whatever the reasons for Inquisitor Sand’s successful petition, the Writ was granted and a ship was needed.

Sand’s long-time friend, Laurent Strophes, a retired Imperial Naval Officer and scholar of naval history, recalled the Arcadia and its last battle. He told Sand about the ship’s reported resting place and Sand immediately dispatched a surveying team, which was happy to report after two months of exploration of the planet that they had indeed discovered the wreck of the Arcadia and that its structural integrity was strong enough for restoration. Using his connections with the Adeptus Mechanicus and Laurent Strophes, as well as other Inquisition allies, Sand started the process of excavating the Arcadia, bringing it to a nearby shipyard, and beginning work on getting the warship serviceable once again.

After many long years of hard work, the Arcadia is once again ready to travel the stars and bring death to the Imperium’s enemies. Under a fledgling Rogue Trader Captain and a hidden banner for the Inquisition, the Arcadia’s machine spirit burns hot in anticipation of the battles it has waited so long for.

Notable Crew Members of the Arcadia: 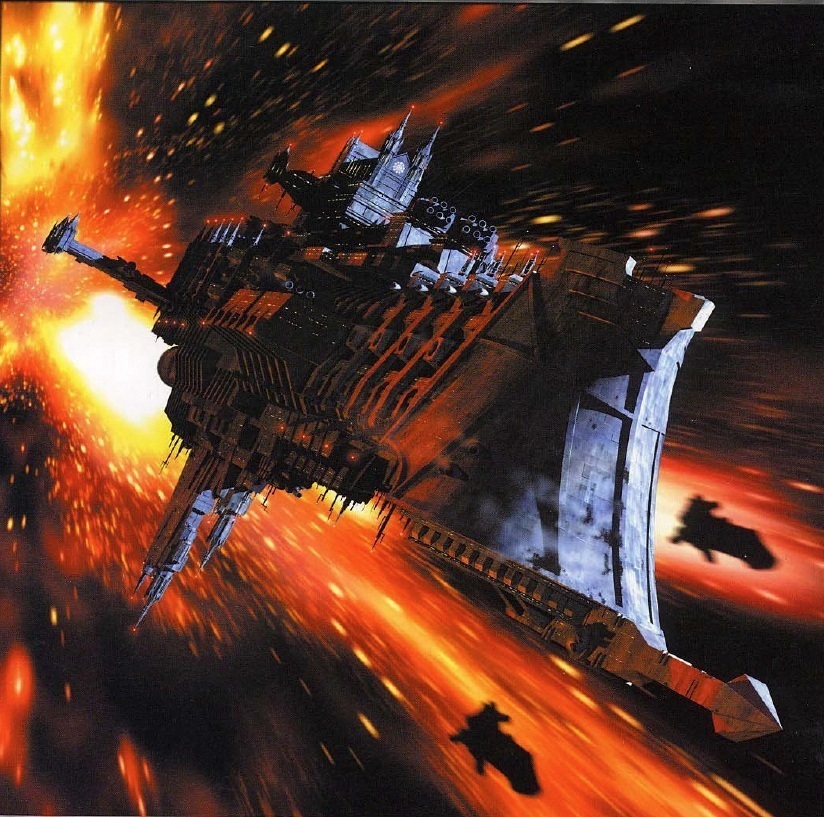