Painting of the Unblinking Eye

A large painting of a distending, disturbing human eye, with a purple iris and a large dilated pupil.

Inquisitor Sand stared at the painting, and though he did not show it, the painting unnerved him. The gigantic eye painted on the canvas seemed intelligent and appeared to be intensely studying its observers as they studied it. Although it appeared blurry, Sand swore that he could see the vague outline of a face in anguish staring out from the center of the pupil. On his right side, his personal bodyguard, the massive Crusader named Red, shifted slightly in his stance, his hand resting on his sheathed sanctified power sword- the Crusader could sense the power of the Warp emanating off the painting and was preparing to defend his master from the unexpected.

While Sand didn’t share Red’s training in psyinscience, he too knew of the painting’s malign construction from his studies. Said to be painted by an insane artist on canvas made from a daemon’s skin, the painting was thought destroyed during the Ecclessiarchy Witchhunters’ assault on the cult holdings of the Eldritch Order of the Unblinking Eye on the planet of Malfi; apparently some cultists escaped the purge with the painting and sought refuge at this remote location on Ganf Magna. They might have been able to rebuild their cult if an Inquisitor hadn’t by chance purchased their hideout.

Sand turned to his left where Interrogator Quint stood staring at the painting with alarmingly calm composure. Despite his cool demeanor, Sand could tell that Quint was not the same person he was before the horrific events he endured on the forbidden world of Mara. His sanity was barely hanging on and Sand feared that Quint’s mind was close to breaking. Of course, Sand was cautious and subjected Quint to a battery of intense taint evaluations and psychological and physical exams, and though he was deemed within acceptable parameters to continue service, additional monitoring would be necessary.

“Quint, are the interrogations of the manor staff complete?”

“Yes Inquisitor,” Quint responded, “of the survivors, cult membership appears to be only limited to the chef, Karla, the reclaimator, Krug, the churigeon Stefan and a few of the servants. Karla and the servants proved to be weak of will and there was no trouble in getting them to divulge the cult’s activities here and the names of their senior leadership- all of which have been terminated except for Stefan and Krug, who escaped during the aftermath of the battle."

“Is Thoddina preparing their warrants for my signature?”

“Excellent. Dispatch a team of acolytes, perhaps Raptor Cell, to track and locate them for termination- I think we have all the information we need.”

“What about the rest of the staff my Lord? Some of them, such as Captain Blucher and the remaining security personnel, are still competent loyal servants of the Emperor despite their exposure to the daemon.”

“Yes, those can still be of some use but I will not take chances with the taint affecting them further. You and Hadrian make arrangements to evaluate and mind-wipe salvageable staff. As for the rest, terminate them with the cult prisoners.”

Sand stared at the painting in thought recalling something he read in his studies of one of the painting’s documented properties- the ability to show the observer whatever they desired with a sacrifice of blood. If the stories were true, then perhaps there was potential to learn what he needed to know. But Sand knew that Chaos was ever-manipulating and only generous with knowledge and power if it got something in return. But still, this was a way to the answers he was seeking, but Sand had never entertained or tolerated the power of Chaos before- why should he now.

He turned to Quint, “you reported that the Navigator, Godwin, was untroubled when he looked into the depths of the painting?”

“That is correct Inquisitor. His will appears to be strong.”

“Excellent, we will need a man with a strong will. Bring him here.”

“Here Inquisitor? He is still new to our work and exposure to relics such as these…”

“Is nothing compared to the horrors he witnesses everyday with his third eye. Bring him here and leave us to ensure the mind-cleansing and executions are carried out.”

Quint hesitated for only a moment before replying, “Yes my Lord.”

Quint exited the room and the painting gazed at his departure and returned Sand’s piercing stare at the same time.

Painting of the Unblinking Eye 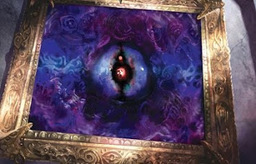