The last surviving card from the tarot deck of Aristarchus (an Inquisition psyker seer), the card depicts the faceless Magus of the Executeria suit. Damage to the card reveals internal crystalline circuitry, which has been built using Xenos technology- making the card a blasphemy to both the Ecclesiarchy and the Adeptus Mechanicus and a heretical item in the eyes of the Inquisition.

This tarot card was secured by members of Inquisitor Sand’s Acolyte Cell: C2 in the aftermath of their battle with a daemon named Tsyiak on the planet of Iocanthos. The daemon had used a senior Inquisition acolyte by the named Aristarchus as a conduit for its re-birth and upon the daemon’s, and Aristarchus’, destruction this sole tarot card was all that was left. The purpose of the Xenos circuitry and the means by which Aristarchus acquired the card remain a mystery and further investigation will be needed.

Unfortunately, the book was lost (most likely taken) when the Acolytes of Red Cell were taken prisoner following the events at the House of Dust and Ash. 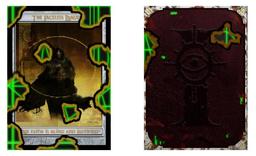