The Keystone from the Steel Clock

A curiously cut coal-like stone of iridescent material the size of a large fist, the Keystone once served as the weight on the pendulum of the great Steel Clock that sat at the center of the ancient Haarlock manse of Gabriel Chase. It was removed by Mir during a battle at an event called the “Grand Conjunction” and with its removal from the clock, a deadly servant of the Haarlocks, known as the “Widower,” was unravelled and the power of the Tyrant Star, Komus was banished from the planet. Now in the possession of Inquisitor Sand, the purpose and secrets of the Keystone remain to be seen.

The Keystone from the Steel Clock 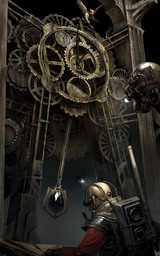