A heavily modified Gladius-class frigate that has served the Deathwatch in the Jericho reach for well over two thousand years. Born in the orbital docks of Mars under the legendary hand of Arch Fabricator Castilus, the Thunder’s Word is compact, heavily armed, and swift beyond all expectations for its class.

Renowned for having undertaken some of the most desperate operations ever attempted by the Deathwatch in its time, the Thunder’s Word has a reputation for surviving against all odds what many consider suicidal missions. With three score kills to her name, many of them more formidable xenos or traitor ships, she is rightly feared by the enemies of man. It is her stealth and ability to elude her foes that cements her legacy, however, slipping past the Chaos fleets above Samech to recover the records the Watch Station codified ‘Slaughterhouse’, and it was the Thunder’s Word that first glimpsed the bio-ships of the Tyranid in the shadows of the moons of Freya.

Under the auspices of the venerable Battle-Brother Pellas, the Thunder’s Word remains the preferred vector by which the Deathwatch inserts and extracts its Kill-teams from their most dangerous operations deep inside enemy held territory. 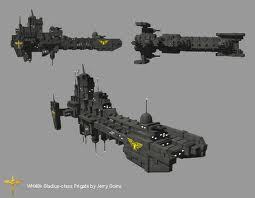