Volume 12 of the Liber Malefic is a book bound in what looks like cured human skin and a single iron hinge in the shape of the symbol of Khorne.

This tome was found by Acolytes of Inquisitor Sand in the Ramsus Manse on the planet of Sinophia. Written by the heretic Marius Hollseher, mere possession of this book is punishable by death in the eyes of the Imperial authorities.

Unfortunately, the Tome was taken from Red Cell’s hotel room (their teammate Praetus was also taken but later returned) during their investigation on Sinophia most likely by a rival Inquisition Cell. 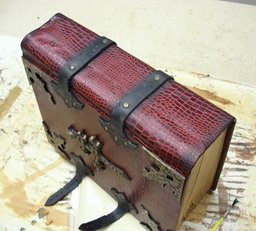