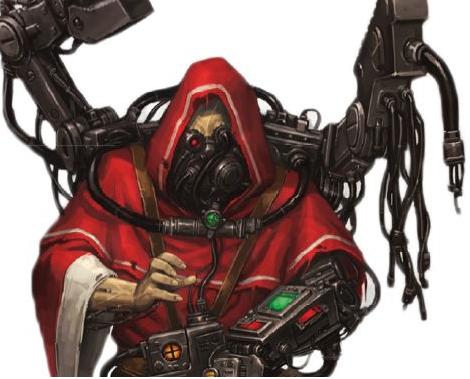 BIO: Stole rare and classified documents from facility on Morwen VI and fled to agri-world Spectoris. Aligned with hostile group known as “The Steel Savages” in an attempt to find a secret underwater laboratory. Together, they salvaged unknown cargo from the lab and fended off an attack by unknown Adeptus Mechanicus aggressors. Magos Caerivus fled the planet with his cargo and his wearabouts are currently unknown.

Notes: Acquired target’s location and proceed to track him down with use of civilian contractor. Due to unforeseen circumstances, The Magos was able to slip away and avoid termination. However, the stolen documents along with his Logician servant were lost when the ship they were on capsized. It is unknown where the Magos is heading but it is confirmed he is in possession of classified recovered ‘salvage’.

Recommend ‘kill on sight’ for any future attempts.

Caerivus sits at his desk pouring over his papers and mumbling to himself. I shuffle along quietly and slowly refill his tea. He waves his hand in a vaguely thankful way but doesn’t turn his attention from his work. With a sigh, he leans back in his chair and stretches.

“There is a lot I’m missing when it comes to this specimen of Redole’s… More than I’ll find in these papers. Perhaps it’s time to take another trip to the lab…” The Magos rises from his chair aand gestures toward me. “A few more dissections of that gift you presented me with might uncover a couple clues I’ve overlooked… Tell me, what was the boy’s name again?”

I remain silent and stare at my master as his mind rushes to find the trivial bit of information it had stored somewhere deep in it’s recesses. Smiling as he remembers, he lets out a pleasant laugh.

“Oh yes; Jak!… Come Jak, let’s see what you can teach me today!” With that, he makes his way out of the room heading towards the lab which housed the remains. I follow closely. I doubt my master is in any real danger, but he claims this ‘man’ may hold the key to unlocking the secret of everlasting life… Maybe that means he can come back to life. That’s all right though. If he does, I’ll be there to simply kill him again…

Rylak slumped against the wall clutching his head. It was easy to be distracted by the visions while traversing the empty halls of the Tricorn, and the silence around him made them no less disorienting. The assassin slowly pushed himself off the wall and continued on his way. His footsteps echoed around the deserted hall and he slowed his pace after just a few steps.

He had traveled this hall many times and had never once seen it completely deserted, yet there wasn’t a scribe or servitor in sight. The eerie quiet alerted him that something wasn’t right and in one quick movement he unholstered his pistol and swung around to face his assailant. Two shots slammed into the decorative molding, missing the shadowy blur as it began to speed towards him. He couldn’t make out the figure completely, but the bright glare of steel being unsheathed was unmistakable.

Damn. She’s faster than the last one…

Two more shots ripped apart the wall as the two assassin’s circled around each other. Rylaks gun deflected one of her sword swipes and she easily dodged his next shot. Within a second, the two had become tangled in a dangerous position. Her sword point brushed against Rylak’s neck while he held his pistol flush with her temple. With one shot left in the chamber, Rylak was about to pull the trigger when the sound of clapping drew his attention to yet another assailant.

“A good show, but there is no need for violence.” Inquisitor Srax-Rhame stood further down the damaged hall, watching the pair in the midst of their death strokes with a small smile on his face.

“She attacked me…” Rylak spoke with force but the Inquisitor merely shook his head.

“If I recall… You shot first… Besides, if Esme wanted you dead we wouldn’t be having this conversation.”

“I doubt that very much…” Rylak’s attention was drawn back to the Moritat woman staring down the barrel of his gun. She gave him a smirk and gestured down to the second blade hovering an inch away from Rylak’s crotch. With a growl, he kneed the blade away and spun out of her grip. He stood in a defensive stance as she backed away to join the Inquisitor, still smiling. “What do you want?”

“That, my boy, is a very open question. What i want is to see every member of the Logicians burned at the stake. But I suppose you’re more interested in my current interests, which involve the potential recruitment of individuals which may help me with certain, subtle, problems. This of course, leads me to you, Mr. Geth.” Rylak cringed. What was the point of an alias if everyone on this planet already knew his name.

“I’m afraid I already have a master who has his own problems.”

“Yes… You’re one of Sand’s boys… I’m sure he keeps you extremely busy.” Srax-Rhame looked oddly amused as he said that last part. “But I’m not looking for a new acolyte… This would be more… Freelance work. That is something you do, isn’t it?” Rylak said nothing as the two Inquisition agents began to walk towards him. “It’s not everyday I hear about an individual able to take on one of the Ashen Tear pretenders and walk away without a scratch.”

“And how do you know about that?” Rylak was startled but the Inquisitor merely smiled as he passed the shocked assassin.

“I’m an Inquisitor… It’s my job to know…” Rylak watched the two with a bewildered look on his face as they walk away from him, further down the hall. Srax-Rhame waved his hand in farewell as he continued to speak. “Just think about it. Maybe we can even help you with your Moritat problem if you prove useful.”

“What Moritat problem?” Rylak tried to hide his feelings as he shouted his demands. Esme turned around and laughed at him.

“The fact that there are many of us tasked to kill you and that you obviously lack the skills to defend yourself.” With that, the two would-be assailants left Rylak alone to ponder what just happened. He stood alone in silence for a few moments staring down the hall they had disappeared into. He could hear the sounds of footsteps racing behind him, some guards attracted by the noise of the battle no doubt. The assassin quickly slunk into the shadows, ensuring he had disappeared before they got there.